Hecate at the Crossroads 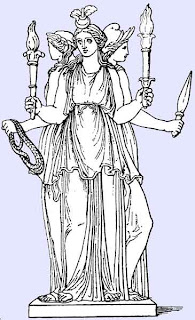 Castles and manor houses are, of course, natural locations for hauntings, particularly if the have a tragic history; but if anything crossroads, yes, crossroads, have an even more tragic and supernatural associations. There is a simple explanation for this. In England, right up until the practice was condemned by Parliament in 1813, people who committed suicide were traditionally buried there. When and why this practice began is not entirely clear, though the suggestion is that it was though such locations would confuse troubled spirits.

But the lore associated with crossroads goes much deeper. In ancient Greece they were sacred to Hecate, the goddess of the witches. There are some lovely snippets of information on ancient beliefs in The Characters, a compendium by Theophrastus, a Greek author who died in 287BC. The author makes fun of superstitious people, which, penetrating to the Greek root, means those who have fear of spiritual things. Theophrastus goes that one step further, defining superstition as ‘cowardice in the face of the supernatural.’ The practice was for such people to anoint the stones at crossroads, both to appease the ghosts and Hecate, who was known to frequent such places.

In general boundaries and meeting points of all sorts have long had strong supernatural associations.
Posted by Anastasia F-B at 00:44