Of Arses and Red-Hot Irons: the Miller's Tale 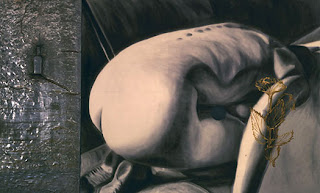 I recently touched the wonderfully hedonistic and ribald poetry of the superb John Wilmot, Earl of Rochester. But the bawdy tradition in English poetry predates him by many centuries, indeed it does. I’m thinking now of Chaucer and The Canterbury Tales, that stupendous compilation that shows so many paths into the Medieval mind. Have you read it? No, well you should; you will almost certainly be surprised by what you find. I first read it in Middle-English, though there are good modern translations.

Let me tell you about the Miller, one of the Pilgrims who accompanies Chaucer’s mixed company to the shrine of Thomas a Becket at Canterbury . To while away the time during the journey from London each is encouraged to tell a tale. The Knight comes first, with a high story of adventure and romance. The Miller immediately takes it upon himself to bring matters down to earth somewhat with the story of a student by the name of Nicholas who persuades Alison, the much younger wife of his elderly carpenter landlord, to go to bed with him. So far, so bad!

But Alison has another admirer, Absolon, the parish clerk. While Nicholas and Alison are in bed together he appears at the darkened window of her house, asking for a kiss. Refusing to go away, Alison finally agrees to his request, though not in the way he imagines, oh no. Remember, it’s dark:

The window she unbarred, and that in haste.

Have done, said she, come on, and do it fast,

Before we're seen by any neighbour's eye.

This Absalom did wipe his mouth all dry;

Dark was the night as pitch, aye dark as coal,

And through the window she put out her hole.

And Absalom no better felt nor worse,

But with his mouth he kissed her naked arse

Right greedily, before he knew of this.

For well he knew a woman has no beard;

He'd felt a thing all rough and longish haired,

Teehee! she laughed, and clapped the, window to;

And Absalom went forth a sorry pace.

So, off he goes, poor man, full of fury and hot for revenge. He borrows a red hot iron from the blacksmith, returning to where Alison lives. Once again, he asks for a kiss. This time Nicholas, who has risen for a piss, decides to join in the fun.

This Nicholas had risen for a piss,

And thought that it would carry on the jape

To have his arse kissed by this jack-a-nape.

And so he opened window hastily,

And put his arse out thereat, quietly,

Over the buttocks, showing the whole bum;

And thereto said this clerk, this Absalom,

O speak, sweet bird, I know not where thou art.

This Nicholas just then let fly a fart

As loud as it had been a thunder-clap,

But he was ready with his iron hot

And Nicholas right in the arse he got.

Off went the skin a hand's-breadth broad, about,

The coulter burned his bottom so, throughout,

That for the pain he thought that he should die.

And like one mad he started in to cry,

Alison’s husband, who is at home, though unaware what is going on, awakes; the neighbourhood awakes. All have a great laugh at the carpenter’s expense! :-))
Posted by Anastasia F-B at 15:40