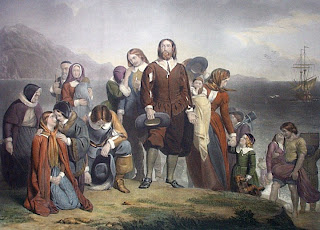 Well, no, not exactly, but I caught your attention, did I not?

It is true, though, that evidence has been uncovered suggesting that some of the colonial communities may have openly practiced witchcraft, swapping spells with African slaves. This comes from a small feature in the February issue of the BBC History Magazine, entitled The Colonists who Practiced Magic with African Slaves (p.12). It reports some conclusions reached by archaeologists and anthropologists who have uncovered a ‘spirit bundle’ below the streets of Annapolis, Maryland.

They were working on a log-road four feet below the present street level when the diggers found a clay and sand bundle, containing a stone axe, three hundred pieces of led shot, 25 common pins and a dozen nails. Discovery of such bundles is not new, but the remarkable thing about this one is that it was placed in plain view. Dr Mark Leone, director of the Archaeology in the Annapolis project, says that this find is quite different from anything else hitherto seen in North America, providing the earliest evidence so far that African religion was being practiced.

The bundle dates to 1700. Dr Leone continues: “We’re particularly intrigued by the placement of this bundle in so visible a spot, because it suggests an unexpected level of public tolerance. All the previous caches of African spirit practices we’ve found in Annapolis were at least 50 years younger. These had been used in secret. But in the earlier generation, the Annapolis newspapers was filled with references to English magic and witchcraft, so both European and African spirit practices may have been more acceptable then.”

Dr Frederick Lamp, curator of African Art at Yale, thinks that the bundle may represent the image of Eshu Elegba, the god of chance and confusion.

Commenting also on the frequent reports on pagan and non-Christian beliefs in The Maryland Gazette published before 1750 Dr Leone says, “English witchcraft in this period existed openly in public and was tolerated. It’s intriguing to speculate how English and African spirit beliefs may have interacted and borrowed from each other.”
Posted by Anastasia F-B at 08:01