The Legend of Joseph of Arimathea 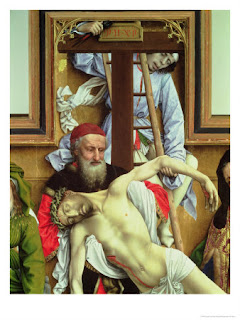 I was thinking about Joseph of Arimathea, of whom almost nothing is known and yet much has been written.

Joseph simply appears in the Gospels as a wealthy man who allowed his own prepared tomb to be used for the burial of Jesus. There is really not much to go on, and the story itself may have been inserted in confirmation of prediction contained in the Book of Isaiah. But on such simple foundations an ice-cream castle has been erected, one in which Joseph has links with Britain, King Arthur and the Holy Grail.

The mythology begins with the apocrypha and un-canonical texts, works like the Acts of Pilate, The Gospel of Nicodemus and The Narrative of Joseph. There are also several fanciful references in the writings of the early church historians.

The first reference to Joseph in connection with Britain comes in the ninth century in The Life of Mary Magdalene, written by Rabanus Maurus, Archbishop of Mainz. The story was taken up by William of Malmesbury in The Chronicles of the English Kings, where Joseph and eleven companions are said to be responsible for the foundation of Glastonbury Abbey.

But it was Robert de Boron, a French poet who lived in the twelfth and early thirteenth centuries, who associated Joseph with the Grail for the first time in his Joseph d’Arimathe, amplifying on aspects of the Acts of Pilate.

In Boron’s account Joseph, imprisoned by the Jewish elders, is sustained during his captivity by the Grail. On his release he brings the sacred vessel with him on his journey to Britain. Legend then became truth and truth legend as the Grail cycle spun ever more elaborate threads. John of Glastonbury claims Joseph as an ancestor of King Arthur. For Elizabeth I his missionary work allowed her to assert that Christianity came to England before the Roman Church. So, the new Holy Grail was the foundation of an English National Church, with Joseph as it’s cup-bearer and prophet!
Posted by Anastasia F-B at 02:21