“Lying is the worst sin in Islam” 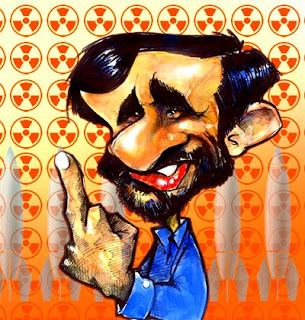 Something odd is happening in the Islamic Republic of Iran. There is a presidential election on Friday, though there is nothing odd or unusual in that. The oddity, rather, is that the campaign itself actually has some life, has something of the ruthless cut and thrust of-how shall I say this?-a genuine western-style democracy. Did you hear something? Could it possibly have been the sound of some grim-faced Ayatollah exploding in his grave?

The contest, of course, is between the hard-line incumbent, Mahmoud Ahmadinejad, on the one hand, and his reform-minded opponents, Medhi Karroubi and Mir-Hossein Mousavi, on the other. All candidates have had the prior approval of the puppet-master of the regime, the Supreme Leader, Ayatollah Aly Khameini.

I assume he must also have approved the principle of television debates between the contenders. In any case television debates there have been, and-oh my-what debates! Real debates, yes, with the levels of nastiness and assaults on personal integrity that we in the west may be used to but the denizens of the Islamic paradise are not. It’s drawing huge crowds, truly it is.

The logic is a little difficult to understand, insofar as this is a regime based on a supposition of unity, of consensus on the political and religious fundamentals. Perhaps the thinking was that Ahmadinejad the Mighty would be able to breathe orthodox fire over such alien concepts as modernisation and reform. But the Mighty One did not stick to grand principles; he got personal, and his opponents got personal right back!

Round one opened with Ahmadinejad accusing the wife of Hossein Mousavi of faking her degree, a pretty low punch. Not true, said Mr. Mousavi, who came back with a left-hook, a hard one: the President was a disgrace to Iran, yes, a disgrace, because of his aggressive foreign policy. Learning nothing from this, Ahmadinejad then accused Medhi Karroubi, himself a cleric, of corruption, to which he responded by lecturing the president on his personal vices-“Lying”, he was told, “is the worst sin in Islam.”

This is going down well in the streets of Teheran, where people are not used to such levels of political excitement. One supporter of the reformist movement said, “We’ve never seen anything like it before. To see a sitting president being criticised on television over every single thing that he has done is just amazing. It’s great to watch.” I bet it is!

Will things ever be the same again, one has to ask? Perhaps it’s all the fault of the Great Satan. :-))
Posted by Anastasia F-B at 16:30