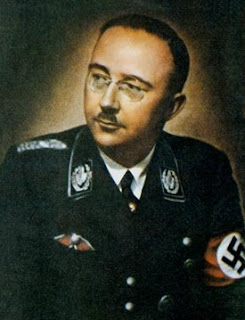 All three of these areas were to be completely 'Germanised' within a twenty year period. All Slavs and the 'racially unwanted' were to be killed or enslaved, and the areas repopulated with small villages of German and SS settlers. Each village, Himmler told Felix Kersten, his personal masseur, "will embrace between 30 and 40 farms. Each farmer will receive up to 300 acres of land, more or less according to the quality of the soil. In any case a class of financially powerful and independent farmers will develop. Slaves won't till this soil, rather, a farming aristocracy will come into being, such as you still find on the Westphalian estates." The villages would be dominated by a manor house, occupied an SS or Nazi party leader, a little bit like the feudal lord of the manor.

Such was Himmler's view of the Nazi Millenium
Posted by Anastasia F-B at 15:46