First Lady of the Third Reich 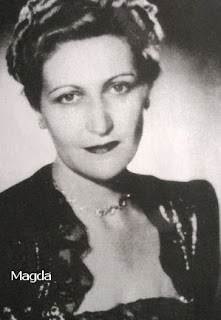 In many ways Magda Goebbels was the most intriguing woman who came to prominence during the Third Reich, with an odd amalgam of qualities; at once intimate and remote, knowable and unknown. One can find her at her most revealing in her correspondence with Ello Quandt, her one time sister-in-law and close friend. She certainly had knowledge of what was happening to the Jews because she continued be her husband’s most intimate confident. On one occasion she wrote to Ello, "It's terrible all the things he's telling me now. I simply can't bear it any more...You can't imagine the awful things he's tormenting me with...I'm not supposed to talk to anyone...He unloads everything on to me because it's getting too much for him." She later told Ello of the decision she and her husband had taken to kill themselves and all of their children. When the horrified Ello objected that she was guilty of no crime, Magda wrote back;

I was there, I believed in Hitler and Joseph Goebbels for long enough. I am part of the Third Reich that is now being destroyed. You don't understand my situation...what am I to do? If I stay alive, I will be arrested immediately and interrogated about Joseph. If I were to tell the truth, I would have to portray him as he was...I would have to describe what went on behind the scenes. Then any respectable person would turn from me in revulsion. Everyone would think that, since my husband was dead or in prison, I was now most terribly traducing the father of my six children. As far as the outside world is concerned I have lived by his side amidst brilliance and luxury, I have enjoyed all his power. As his wife I have stayed with him to the bitter end. No one would believe me if I said I had really stopped loving him, and...perhaps I still do love him, against my reason, in the face of all my experience with him. Regardless of what is behind me, Joseph is my husband, and I owe him loyalty, real loyalty...and comradeship beyond death. For that reason I could never say anything against him. After all this, after this plunge into the abyss, I could not do that!

When Ello asked about the children, Magda said that she would take them with her, 'because they are too beautiful and good for the world that's coming'. She also took comfort in notions of rebirth-"They won't die, none of us will die...we just go through an apparently dark portal into the next life."
Posted by Anastasia F-B at 01:47