Barracks for MPs-Flipping the Bird! 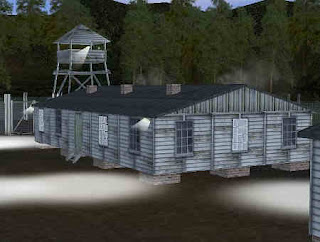 I read in today’s Telegraph that the most popular solution among voters to the scandal of MPs' expenses, to the problem of ‘flipping’ and second homes, is to insist that they all live in state-provided accommodation blocks: barracks, in other words! This was disclosed by Sir Christopher Kelly, chairing the Committee on Standards in Public Life, charged with looking in to the whole sordid business.

Yes, I quite agree, with security for the dear souls provided by perimeter fences and searchlights. What better solution?

Anyway, it delights me to report that Shady Shahid Malik, recently readmitted to the Government of the Living Dead as Communities Minister, is to be subject to further investigations over allegations that he broke the House of Commons rules on expenses. The cause has been taken up by John Lyon, the Parliamentary Commissioner for Standards, after a complaint was lodged by a member of the public. Apparently Shady, while claiming £6000 in expenses for his main constituency office in Dewsbury, was also claiming an extra £200 a month for ‘additional office space’ in the three years between 2005 and 2008. And where was this ‘additional office space’? Why, it was the downstairs of his Dewsbury house!

This is a foreign country; we do things differently here. No, we don’t take to the streets like the people of Iran. Our revolutions, when they come, are quiet and inexorable, but no less compelling, no less dramatic.
Posted by Anastasia F-B at 16:07