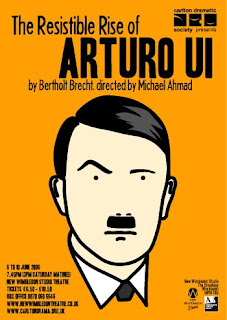 Those on the political left, particularly those whose views have Marxist overtones, usually tend to be keen on reading the teacup of history, drawing lessons from the leaves. Yes, they read history…and they almost invariably draw the wrong conclusions.

The classic example here, the one I am thinking of, is the rise of Hitler. Talking, so the argument goes, was not enough to prevent this; only direct action would suffice, only violence and more violence; only getting Nazis off the streets.

Oh, but there was violence in the last years of the Weimar Republic, intense violence directed against the Nazis by their opponents, particularly the KPD, the German Communist Party. In the early 1930s Germany was in a state of political civil war. I suspect that the peace time murder rate for 1932 has never been exceeded. Yes, there was violence and the Nazis grew strong and stronger; the more their opponents hit out, the more they benefited, nowhere more so that in ‘Red Berlin’, where Joseph Gobbles, Gauleiter since 1928, increased membership dramatically.

So, yesterday, Nick Griffin was forced to abandon a press conference by an egg throwing mob, shouting “Off our streets, Nazi scum”, a mob that was clearly mindful of the ‘lessons of history.’ Weyman Bennet, the organiser of the attack, and the national secretary of an organisation that goes by the name of Unite against Fascism, said that it was important to ‘stand up to the BNP’. Standing up to the BNP is apparently to allow the nation to see a chanting and vicious mob throwing missiles, in the belief that political victory for them lies in silencing those they do not want to hear; those they do not want anyone else to hear.

For smart-suited Griffin the propaganda value of these scenes probably carried far greater weight than what he would have said, if he had been allowed to say it.

Violence will not stop the BNP, oh no it will not; only words will. And the words I have in mind are their own. Yes, I would allow a platform for Fascists for the simple reason that once people at large know just how simplistic their words are it will collapse from under them. That is the intelligent deduction, not the ‘lesson of history.’
Posted by Anastasia F-B at 16:34