Days of Glory, no, Indigènes! 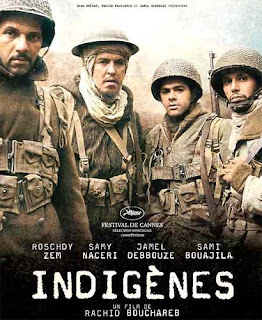 Days of Glory is a French-language film directed by Rachid Bouchareb. Released in 2006, it won the best actor award that year at the Cannes Film Festival. It was also nominated for the Academy Award for the Best Foreign Language Film, but lost out on the day to The Lives of Others, a worthy opponent. It was broadcast on BBC 4 a few days ago, when I saw it for the first time.

The focus is on four men in particular: Said, Yassir, Messaoud and Abdelkader. They fight through campaigns in Italy, southern France and on to Alsace. They fight with courage and bravery but they are treated shabbily; they are discriminated against by the nation and the army they serve, forms of discrimination both petty and grand, from denying them tomatoes to refusing leave and promotion. It upset me. I can imagine how those men must have felt, risking their lives when their lives had such little apparent value.

The first thing I have to say is that the English title in retrospect made me angry, a vacuous cliché so lacking in imagination, one that says little or nothing about the movie itself, about what the director was trying to say. Who decides these things, I wonder? Do the film makers themselves have any input? I saw the movie advertised when it first came out but decided not to go because I thought it was just another ‘war movie’, another Saving Private Ryan, and I’m not all that keen on war movies as such. It’s not; oh no, it is not. The original French title is Indigènes, meaning Natives, more appropriate in every sense, as I will explain below.


The discrimination did not end when the war ended. When the nations of North Africa and the other French colonial territories became independent the French government discontinued payment of war pensions. A long legal battle ensued but it was only after the release of Indigènes that this was reversed and veterans paid what they were due. What a powerful medium for justice cinema continues to be, when it chooses to be.
Posted by Anastasia F-B at 01:15