The Teutonic Knights: from Persecutors of Pagans to Harbingers of Race War 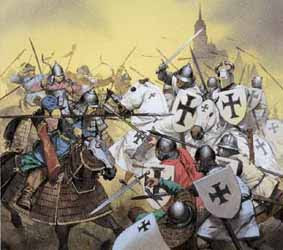 If we begin with the Enlightenment there is little doubt what the Teutonic Knights represented-cruelty and coercion. For Johann Gottfried Herder the behaviour of the Knights towards the native Prussians, particularly in the policy of forced conversion to Christianity, was comparable to the Spanish policy towards the native peoples of South America.

Even so, while this idea found wide acceptance, it could be combined with a residual belief in the 'civilizing' mission of the Order. For example, in 1847 Friedrich Christoph Schlosser published Weltgeschichte für das deutsche Volk in which they were accused of rapacity and fanaticism, but nevertheless commended for the advance of 'Christian-German' civilization into barbarian lands. But the first thoroughly modern and chauvinist perspective comes with the work of another historian-Johannes Voigt of Köningsberg.

In his nine-volume history of the Teutonic Order, Voigt was to complete the most thorough assessment ever written. His central contention was that the 'moral judgements' of people like Herder were anachronistically out of place, as the survival of paganism in the heart of Europe had to be understood from the perspective of the Medieval church. For them the campaign against the ancient Prussians was entirely praiseworthy. Voigt also combined this with a rather more modern anti-Slav, specifically an anti-Polish perspective. If the Order had not conquered the Prussians the task would have fallen to the Russians or the Poles, denying the benighted barbarians of the benefit of the 'German spirit.'

In political terms this translated into a thoroughgoing defence of the superiority in every measure of German culture, and a rejection of the Polish demand for statehood, a view that travelled with ease from the scholarly to the political arena. In 1848, Wilhelm Jordan, a deputy of the National Liberal Party, declared that one should never forget in dealing with "these charming mazurka dancers" that Poland only ever represented anarchy, and the partitions were simply the "burial of a long decomposing corpse."

Thus a new mood was struck, expressed at its most fullest in the writing of yet another historian, Heinrich von Treitschke, arguably the most chauvinist and nationalist of them all. In Das deutsche Ordensland Preussen, which appeared in 1862, historical scholarship was given the colour of new modes of nationalist mythology, a paean to the modern state of Prussia, the "conquerer, teacher and discipliner" of its neighbours.

For Treitschke, whose work also had a thoroughly modern determinist and Darwinist edge, the Teutonic Order's Prussia was a 'bulwark' against the Slavic east, an island where the supreme values of the state were were upheld against the "anarchaic crudity of the Polish Slavs." Treitschke's Order had little to do with Christianity and everything to do with Race. His contemporary, Max Toeppen, tried to challenge this new direction, warning against the projection of nineteenth century nationalism onto the Medieval past, though to little lasting effect. Amongst the German political elite Treitschke's version of the Ordnensstat was far preferred over simple appeals to sobriety and reason.

In 1902, Kaiser Wilhelm II, that most operatic of modern monarchs, organised a costume festival to celebrate the restoration of the Order's headquarters at Marienburg, a grotesque combination of pseudo-Medievalism, modern nationalism and German mysticism. In the Slav areas of Europe the spectacle was an occasion for both humour and anger. In Prague one socialist newspaper published a mock 'Wanted' notice, in which an escaped mental patient is sought calling himself Kaiser Wilhelm, last heard of making deranged speeches in Marienburg. In Poland offprints of The Teutonic Knights, an anti-German historical novel by Henryk Sienkiewicz were distributed to a congregation Gniezo Cathedral, attending a thanksgiving to celebrate the Battle of Tannenberg, the great victory of the Poles and Lithuanians over the Teutonic Knights in 1410.

The Germans also were mindful of this historical reverse; and in 1914 deliberately named their first victory over the Russians as Tannenberg. In the Weimar era the Order was invoked as a symbol of nationalist demands for a 'new order' in the east. In Unsere Ostmark of 1923 Dr Kathe Schumacher argued that the Order had returned to the those allegedly ancient German lands of the east to breed a 'race of supermen', quite an achievment for a celibate Catholic order!

The Order was further celebrated in the Artamanen League, whose members included Heinrich Himmler and Rudolf Hoess, later commandant of Auschwitz. Hitler himself was to invoke the myth of the Teutonic Knights. At a meeting at the Tannenberg Memorial in August 1933 he declared that the new Reich would have to follow the Knights' path to the east if "the nation was to have its daily bread." In 1942 he was to say that his commanders in Russia were 'Crusaders for the National Socialist cause.' For Himmler, filled with the same misty notions as the Kaiser, the SS were the new Teutonic Order. It is surely no surprise that 'Tannenberg' was used as the code name for the operation of the Einsatzgruppen in Poland. A mission of Catholic civilization had given way to the worst forms of Race war. 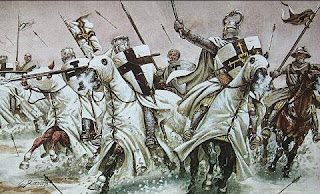 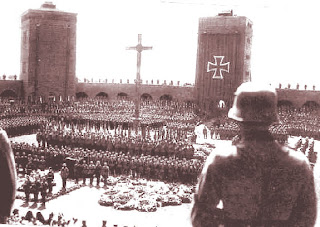