The Roses of Elagabalus 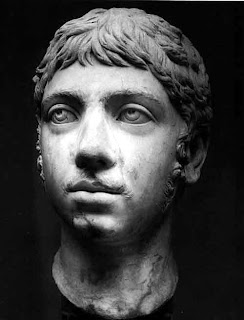 Do you have an image in your head of a decadent Roman Emperor, perhaps drawn from Hollywood? Well, it's not all fiction, believe me. Let me introduce you to one who was arguably the most depraved of them all. :-))

Marcus Aurelius Antoninus, better known as Heliogabalus or Elagabalus, was a member of the Severan dynasty. Though his reign in the early third century comes before the onset of the decline he is probably the one figure who corresponds most to the popular image of a corrupt and hedonistic ruler of the ancient world.

While I could not possibly say that I admire him in the way that admire Marcus Aurelius, Diocletian and Julian he carries a certain fascination for me as a symbol of excess, excess in power. While Septimius Severus, his uncle, had attained power by ruthless ability, Elagabalus simply succeeded to it by no merit of his own, always a dangerous thing in the Roman world..

In some ways he was quite a tragic figure. He was only fourteen when he became emperor, and behaved thereafter like a spoiled adolescent with absolute power at his finger-tips. Coming from Emesa in the east of the Empire, and a former acolyte to El-Gabal or Heliogabalus, the Sun God, he brought the new cult to Rome. Unfortunately for him he also brought a high degree of eastern excess with him, outraging the puritanical Romans in the process, particular with regard to his sexual practices. He was finally assassinated by the Praetorian Guard in 222AD, in his eighteenth year, and his memory subsequently erased from the public record.

How much of what was subsequently written about him is true is almost impossible to say. But he was to become a hero long after his death, a kind of avatar for the decadent movement in the late nineteenth century. 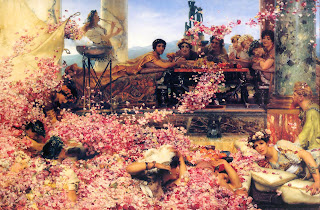