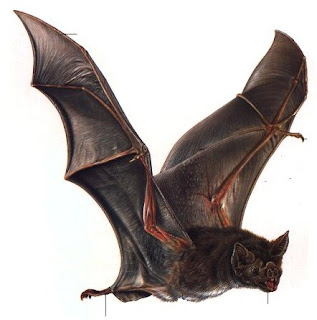 This is a story from Ethiopia of an as yet unidentified species of vampire bat, one that is reputed to drink the blood of people in their sleep, and one that is much feared by the local people. It’s possible that this is yet another ‘rural myth’, for the only substantive source-beyond hearsay -is Dead Men Do Tell Tales, a book published as long ago as 1943 by one Byron de Prorok, a traveler and a kind of archeologist, along the lines of Lara Croft or Indiana Jones! He wrote several books describing his adventures, which depend more on sensation than science. It’s also possible that he was something of a fantasist.

So, it was in Ethiopia that he reports coming across mention of these bats, known to the indigenous communities as death birds. According to his account they are to be found in the province of Walaga, in a remote location known as the Devil’s Cave. De Prorok travelled to the place, disturbing a great colony of bats, with wingspans of some two to three feet. From there he went to a nearby goatherd’s camp, where he found that the men had bite wounds on their arms. All showed signs of sever blood loss. One man, soaked in bloody rags, was close to death.

That’s it, not really very much to go on, just an unconfirmed report from a somewhat questionable source. It’s still true, though, that not all of nature’s secrets have been revealed. :-)
Posted by Anastasia F-B at 00:42