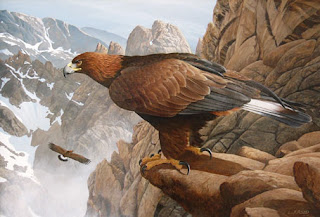 The eagle has long had noble associations, in history and in folklore. It can be found as a symbol of power and majesty in the cultures of Babylon and Persia. In Roman legend it was the 'storm-bird' of Jupiter, the carrier of his thunderbolts. Gaius Marius, a leading soldier and politician, made it the symbol of the Senate and People of Rome, ensuring that from this point forward the legions would carry eagle ensigns.

In Christian tradition the eagle is associated with St John the Evangelist, and appears on the lecterns of churches holding the Bible on its wings, thus repelling the serpent of falsehood. According to St Jerome, it was the emblem of the Ascension of Jesus.

In European royalty, the eagle was most often adopted as a badge by those claiming a universal authority over other kings and princes. Charlemagne wore an eagle-embossed cloak. Canute the Great was buried in one. This imperial pretence was later adopted by the Napoleons. In the Byzantine Empire the Palaeologue dynasty adopted a black double-headed eagle with spread wings, representing the Roman succession in both the east and the west. In this form it was later taken up by the Tsars of Moscovy, the Third Rome, and by the Holy Roman Emperors in general and the Habsburgs in particular. 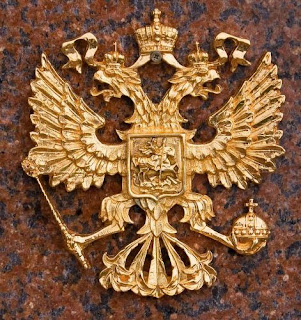