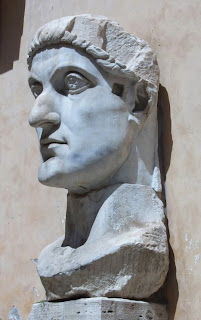 So why did the Emperor Constantine favour Christianity? It was politics, dear boy, politics! Yes, I simplify, but in simplicity there is always a hard nugget of truth.

Victory at the Battle of the Milvian Bridge was not sufficient in itself; the empire had to be pacified, and one way of achieving this was to end the persecution of the increasingly important Christian community. But the Edict of Milan only extended recognition to Christianity as one of the empire's many cults, with Christ no more significant than Apollo, to whom the Emperor had already pledged his special allegiance. From a purely Christian perspective the Milan decree was just as intolerable, if not more so, than the persecutions of Diocletian.

While Constantine hoped to harness the power of the Christian God, it seems certain, his background notwithstanding, that he had an imperfect understanding of the true nature of the religion. It was his continuing need for political support that served to focus his thinking, to appreciate the power that could be conferred by a church, infinitely better organised than its pagan competitors. It was this unified and organised church that he saw as an essential base to his power, and made him all the more determined to maintain that unity after his victory over Licinius in 324. At the First Council of Nicaea, summoned to address the dangerously disruptive Arian heresy, Constantine appeared as the dominant influence, more powerful than any bishop, beginning a long tradition of Caesaropapism.

Now in the latter part of his reign, Constantine gave further signs of the special significance that Christianity had achieved in his political scheme of things by lavish patronage, in sharp contrast to his neglect of the pagan cults. But it is always well to remember that to the very end, even in the great city of Constantinople, the supreme figure, even the supreme deity, was not Christ but Constantine, which makes him not that much different to his imperial predecessors, all the way back to Augustus. Baptism only came at the very end for an Emperor who was always more mindful of earthly than heavenly power.
Posted by Anastasia F-B at 16:03