Stealing the Victory: Iran and the Mad Midget 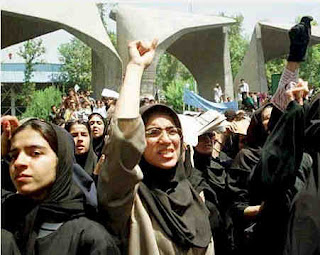 Yes, I would be angry too if I had to face another four years of living in a country governed by that grinning cretin, Ahmadinejad. But we all knew that he was going to ‘win’ the Iranian presidential elections; most Iranians probably new he was going to ‘win’, not least among his opponents.

So, why are people on the streets; why is Iran seeing more violence at any time since that old fright, Khomeini, ousted the Shah all those years ago? Why? Quite simply, rigging an election is one thing and rigging it in such a way as to assume the entire nation is made up of stupid people quite another. That’s what people resent more than anything. If the Mad Midget had received, say, 52% of the vote it might have left his opponents disappointed but resigned. But 62.4% that just says power is mine and I don’t give a toss what you think. Hell, I would take to the streets!

This is a new age, a wonderful new age; the age of the internet, the mobile phone and U tube. Repellent and ugly regimes are finding it more and more difficult to repress their people in perfect isolation from the rest of the world.

I should, on further reflection, really introduce a word of caution here. I suspect that outside observers might be under the impression that something profound is happening in Iran: that a ‘green revolution’ is underway on the same basis as the ‘orange revolution’ in the Ukraine a few years ago. Although I imagine there are some, perhaps many, who would welcome the end of the ‘Islamic republic’, the real issue hinges on the unpopularity of Ahmadinejad, particularly in relation to internal domestic and economic policy. There is no reason to suppose that Mousavi, even if elected, would alter Iran’s direction in any fundamental way.

People change, I know, but consider Mousavi’s past record. As a former prime minister, he was a key ally of Khomeini in the 1980s and an advocate of an anti-western foreign policy. Amongst other things he encouraged Hezbollah in Lebanon in its campaign of hostage taking. There is no reason to suppose, moreover, that he would bring a stop to Iran’s nuclear ambitions, now something of an article of faith among the ruling circles in Iran.

In the end the real power in Iran lies with the clerical throne, currently occupied by Ayatollah Ali Khamenei. It is he who will make or break Ahmadinejad or Mousavi, not the frustrated electorate.
Posted by Anastasia F-B at 15:41