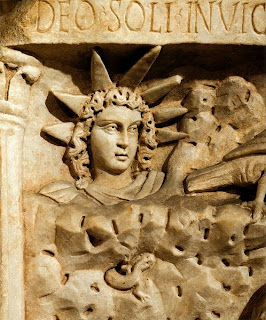 Christmas Day, the 25th of December, the day that Jesus was born in a manger, is it not? Well, actually, no, it isn’t. The Gospels make no mention of the day, or the time of year, when Christ entered the world. It was centuries after his death that the Church alighted on 25 December.

And why that specific date? For the simple reason that the church was adept at grafting its own feast days on to pre-existing pagan holidays. Late December was the very height of the Roman holiday, the time of Saturnalia, with the 25th day of the month celebrated as the birthday of the Sun God, Sol Invictus, who had originally come to Rome from the east.

The cult was first brought to the city by Marcus Aurelius Antoninus, an emperor of the Severan dynasty, who had grown up in Syria , where he served as a priest of the local sun god, El-Gabal. From this he was to be known to history as Heliogabalus or, more commonly, Elagabalus, one of the most notorious of all of the emperors. Sun worship had been growing in popularity in the years before Elagabalus’ ascent, presenting him with the opportunity to install his favoured version of the cult into the Roman Pantheon, renamed as Deus Sol Invictus, standing over Jupiter himself. The new cult did not survive Elagabalus’ downfall and death in 222AD, though emperors continued to be shown on coins wearing the sun-crown.

It was Aurelian, the great soldier-emperor, who brought it back, after his victories in the east later that same century. This was at a time when the Empire needed unity before all else. Sol Invictus was to be the premier divinity of the Empire, uniting all sections, east and west, in the worship of a single god without betraying their local cults. The birthday of the Undefeated Sun was officially given as 25 December-Dies Natalis Solis Invictus.

In a sense this was a foretaste of what was to follow under Constantine and his successors, though Christianity, in contrast, was premised on the death of all other cults.

So, please, next Christmas, each and all who may come to read this, think not of Jesus but of Sol Invictus, and shine always with the Sun!
Posted by Anastasia F-B at 00:51