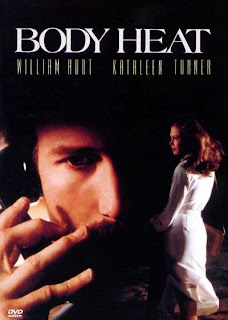 I love film noir and Body Heat, starring William Hurt and Kathleen Turner, is one of the best movies in this genre. Made as long ago as 1981, Turner plays Matty Walker, a ruthlessly ambitious woman, a femme fatale in the most complete sense.

A married woman, she becomes sexually involved with Hurt, who plays Ned Racine, a small-time lawyer. Their original meeting seems entirely coincidental but, bit by bit, as the story unravels, it becomes clear that Matty has deliberately chosen Racine in an elaborate plot to murder her wealthy husband, played by Richard Crenna. Matty behaves with complete ruthlessness, ensuring the murder is carried out and ensuring that Racine alone will stand blame. In the end she is seemingly killed in an explosion in a boat house, and Racine is arrested for the murder of her husband. But, you see, Matty is not Matty after all! Oh, to be rich and live in a faraway land!
Posted by Anastasia F-B at 15:34