Bodin and the Witches, a Journey into the Demonic Mind 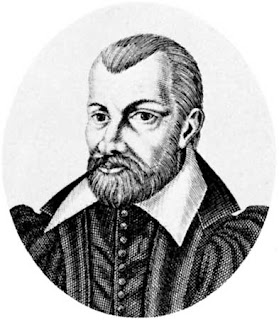 Jean Bodin, a sixteenth century French academic and professor of law, is sometimes known, if he is know at all, as one of the founders of modern political science. But Monsieur Bodin had another interest apart from his theories on sovereignty: you see, he was an ‘expert’ on witchcraft.

In 1580 he published a treatise entitled De la Demonomaine des sorciers, later used like the earlier Malleus Mallificarum as a witch-finding manual. The following extract gives some flavour of Bodin’s views on the subject;

Now, it is not within the power of princes to pardon a crime which the law of God punishes with the penalty of death-such as are the crimes of witches. Moreover, princes do gravely insult God in pardoning such horrible crimes committed directly against his majesty, seeing that the pettiest prince avenges with death insults against himself. Those too who let the witches escape, or who do not punish them with the utmost rigor, may rest assured that they will be abandoned by God to the mercy of the witches. And the country which shall tolerate this will be scourged with pestilences, famines, and wars; and those which shall take vengeance on the witches will be blessed by him and will make his anger to cease. Therefore it is that one accused of being a witch ought never to be fully acquitted and set free unless the calumny of the accuser is clearer than the sun, inasmuch as the proof of such crimes is so obscure and so difficult that not one witch in a million would be accused or punished if the procedure were governed by the ordinary rules. . . .

And so it proceeds in this same hysterical tone.

Bodin’s thesis rests ultimately on one core proposition: that a witch was, by definition, someone who had entered into a pact with the Devil. In seeking proof of this alleged link anything, literally anything, was permissible; accusations obtained in secret from people whose testimony was never examined in due legal process; the testimony of children; and, of course, confessions obtained under torture, even the torture of children.

As one can see from the above extract, authorities who failed to treat suspects with due harshness risked being abandoned by God and left at the mercy of the witches. He even went so far as to say that judges who failed to convict and execute alleged witches should themselves be executed. The point is that, for this man, accusation in itself was enough; there was no escape after that. There is, perhaps, an echo of things to come in the Demonomanie, given the almost sadistic delight Bodin takes in dwelling on the kind of tortures that should be applied in obtaining confessions.

The book still has an educative purpose, though in ways that Bodin can never have conceived. It gives a high degree of insight into the psychology of hysteria, a path into the mind of a bigot and a torturer; a path into the darker valleys of the modern age, as well as ages past.