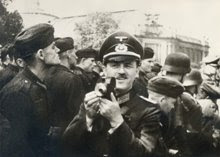 I’m a member of the film society at my university. Last term we screened La Guerre d'un Seul Homme-One Man's War-directed by Edgardo Cozarinsky, an Argentinean in writer and film-maker. It’s a remarkable dissertation in what the director calls ‘documentary fiction.’ He’s taken a lot of war-time footage, most from occupied France, Paris, in particular, and some from the Eastern Front, to create a visual essay. Some of the footage is light-hearted, to the point of outright banality, some of it darker and altogether more serious. Much of it contains commentary of the day, particularly on aspects of Parisian life or more generally the politics of France during the occupation.

The whole thing is punctuated by readings from the Paris Journals of Ernst Jünger, who served as an officer in the occupation force for much of the war. Jünger is probably best known for In Stahlgewittern-Storm of Steel-, his account of life on the Western Front during the First World War. He had an international reputation, which give him easy access to French intellectual salons in Paris, where he met with people like Cocteau and Picasso. Jünger was an anti-Nazi, involved in the fringes of the 1944 Plot against Hitler, but he always seems to maintain a sense of Olympian detachment, disapproving of much of what he sees, but never quite prepared to take that final step. It was of particular interest for me because I know Paris so well, wandered the same streets, parks and embankments as Jünger, and had the same kinds of encounter. There is a deep poignancy to the whole thing; there was for me, anyway.
Posted by Anastasia F-B at 00:58