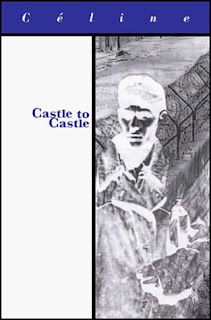 Who was Céline? Why, Céline was Céline, a misanthrope and cultural pessimist, who found in Fascism a way of giving some degree of coherence to his thoughts. But he was far too eccentric, far too much of an individualist, ever to be constrained by an ideological straightjacket. You see, Céline does not discriminate in the forms of prejudice he displays: he hates everybody, regardless of race or creed! Castle to Castle (D'un château l'autre), his post-war account of Vichy in exile, in the sheer intensity of the prose, the machine-gun staccato of his delivery, the passion with which he carries his thoughts forward, displays for me the blackest of black humour and satanic irony, though I admit this may not have been the author's intention! Intentionally or not, he makes the absurd look absurd; and what better way of perceiving the dust of Vichy!
Posted by Anastasia F-B at 00:57