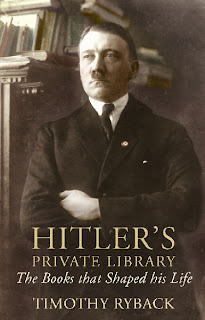 I had a quick trot through this book, which arrived in my college library last session. I already knew that Hitler was a reader, though of a very specific type. His favourite form of fiction was the western, particularly those written by Karl May, and the detective story, though he liked to keep these low-brow tastes a secret from the general public. A boilermaker unwise enough to tell his friends that the Führer had a taste for adventure stories ended up in Dachau.

Apparently his personal library once amounted to some sixteen or seventeen thousand books, not all detective stories and westerns. A good bit of what remains is stored in the Library of Congress and Brown University, although this amounts to only ten percent of the total. Timothy Ryback, the author of this survey, was clearly less interested in the books as such than in discovering traces of Hitler himself, in pencil strokes, exclamation marks and turned pages. He even manages to pinpoint exactly when a particular book was being read. While at the Wolf’s Lair, his headquarters in East Prussia, he was apparently reading Robert Graves' Claudius novels.

Anyway, on the author proceeds, following traces of the tyrant, in his grunts and snorts. He got particularly excited on discovering a crinkly little hair, which he assumes fell from the Führer’s moustache. Really? Well, maybe he’s just being coy! :))
Posted by Anastasia F-B at 15:56