The Major and the Devil 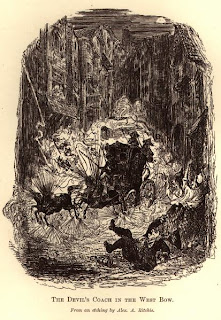 Those of you who have visited Edinburgh, the Scottish capital, may have come across the story of the Wizard Weir, executed for witchcraft, incest and bestiality in 1670, during the reign of Charles II. Thomas Weir, a respectable figure in society, an officer in the city guard and a member of the Scottish Presbyterian Church, which followed a particularly strict Calvinist theology, took ill and started to confess to the most horrendous crimes. His 'confession' was initially held to be born of delirium, but when his sister, Janet, confirmed the accuracy of his words, both were put on trail and duly condemned. Weir was garroted and his corpse was then burned. Janet was hanged.

There is an interesting essay on the subject of Thomas Weir by the Scottish historian David Stevenson, entitled ''Major Weir: a Justified Sinner?'' (Scottish Studies, 16, 1972). The author links the case to the Presbyterian obsession with Predestination. Weir made a voluntary confession to his crimes and refused all attempts to persuade him to seek the pardon of God. Even on the gallows, when he was bid to say 'Lord be merciful to me', he responded as before: "Let me alone-I will not-I have lived like a beast and I will die like a beast." The theme of strict predestination, and the possible adverse moral implications of such theology, was later taken up by James Hogg in his novel The Private Memoirs and Confessions of a Justified Sinner.

Weir’s house in the West Bow was pulled down last century, though the ghost is reputed still to haunt the area. He and his sister are seemingly allowed a sabbatical from hell, at the conclusion of which the Devil picks them up in a fiery coach. A chauffer ride to hell: what could be better?
Posted by Anastasia F-B at 16:23