Christianity and the Mother Goddess 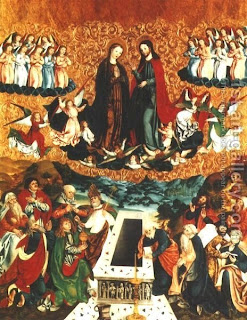 The more I look into Christianity the more complex the religion appears. In some sense it really is not a monotheistic religion at all, despite all the subtle apologetics over the exact nature of the Trinity. Indeed, if one looks beyond this core theological concept, there is a clear pantheistic quality to the faith, certainly in its Catholic clothing, with saints and intermediaries of all kinds in a sort of mutation of a late pagan tradition. But the key-figure, the mother-goddess, if you like, is the figure of the Virgin.

I read Mary and the Making of Europe by Mari Ruben in the March edition of History Today, part of the argument she presents in her book, The Mother of God: A History of the Virgin Mary, which I am also reading.

The cult of Mary served so many different purposes. For one thing its spread across Europe from the eleventh century onwards helped give a universal focus to a Church that had been fragmented in its devotion to local martyrs and saints. For another Mary was a more accessible figure, more human, if you like, than the Father, the Son or the Holy Ghost. More than that, she was believed to possess forms of leverage unique to herself. After all, she was a mother, was she not, and what son can refuse a plea from his mother? There is a twelfth century French prayer which sums up this mood perfectly;

Whatever you wish
Your only son will give you.
For whomever you seek
You will have the pardon and glory.

It was to her that even the monks turned when others might have been uncharitable or unforgiving;

O blessed and most saintly Mary, always Virgin, I am thus afflicted in the face of your goodness. I am greatly confused by the abominations of my sins which have made me deformed and horrible in the eyes of angels and all saints.


Mary also served as a focus of late Medieval anti-Judaism. As Mary was the vessel of the Incarnation-a blasphemous concept in Judaism-she was often deployed as proof of the perversity of the Jews and an instrument for converting unbelievers in the miracle stories of the period.

So Mary became a friend to the errant, a confidant of both monks and nuns, the Great Mother, in some ways more important than Christ himself in terms of popular devotion. All this is quite remarkable when one considers how little she figures in the Gospels.
Posted by Anastasia F-B at 16:28