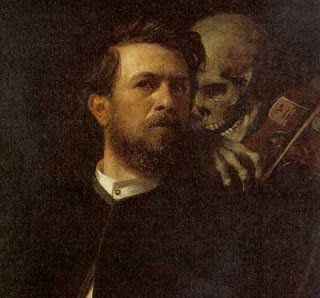 I first came across the story of Faust when we studied Marlowe’s The Tragical History of Doctor Faustus when I was at school. I was attracted to the supernatural elements, the idea that it was possible to obtain earthly power by a form of demonic pact; attracted and repelled at one and the same time.

Being as I am I could not leave it at that, so I started to root around, eventually reading Goethe’s version of the legend in his two part masterpiece. I can’t say I fully understood it at the time-I was only fourteen years old-but I was immediately aware, especially after reading part two, that this was an infinitely more complicated and interesting Faust than that of Marlowe. More than that, I could see that the story itself had undergone a deep transformation; that the fable of good and evil, a fable based on the dangers of seeking hidden powers, had been stripped away. In Goethe’s play Faust is redeemed, but the redemption, true redemption, is in the attainment of the higher forms of freedom and self-understanding. It was an end of both Medieval imagination and the simpler forms of Christian morality.

The original Faust-indeed if there ever was an original Faust-is thought to be one Georg or Johannes Faust, an alchemist who once attended the University of Heidelberg in Germany. Widely known for his skill in magic, he died under mysterious circumstances in about 1540. This was a time when belief in the diabolical pact was at its height; witches were regularly accused of entering into such arrangements.

The elements of Faust’s story, both fact and fancy, were finally set down in the Historia von Dr Johan Fausten, a chapbook published in Frankfurt in 1587. In this he is depicted as an amoral rogue who enjoyed twenty-four years of perversion and excess as well as becoming the most notable astrologer of his day, one whose predictions were never wrong.

Unlike witchcraft, whose practitioners suffered repeated persecution, alchemists stood on the frontier of what was and what was not permissible, sometimes stepping over in their thirst for knowledge. Knowledge, the limits of inquiry, better said, had long been determined by the church. Those who have read Umberto Eco’s novel The Name of the Rose will recall the figure of Venerable Jorge, who insisted that there was no progress in Knowledge, only endless and divine recapitulation. Faust, if you like, represents the rebellious and the restless, a figure who was determined to escape from the limitations of recapitulation, divine or otherwise. He had to start as a villain, a monster of pride; he had to end as a hero, a harbinger of a new age.
Posted by Anastasia F-B at 00:20