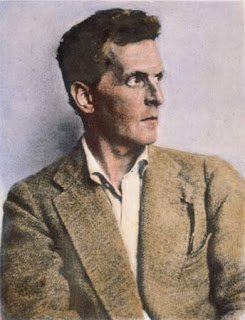 In the Tractatus Logico-Philosophicus Wittgenstein says that the limits of thought are determined by the limits of language. In other words, we cannot go beyond language; for to do so would be to go beyond the limits of logical possibility. Logical propositions, expressed in language, are, according to Wittgenstein, 'pictures of the world.' This means, in effect, that certain things simply cannot be said if they do not correspond to the reality of the world; this means that the Tractatus itself cannot be said; for the various propositions are not pictures of the world!

Wittgenstein, recognising this problem, tried to overcome it by saying that although certain things cannot be said to be true, they can be shown to be true, although he eventually slams the door behind him in his concluding proposition-‘Whereof we cannot speak, thereof we must be silent.' Consider the example of God. Wittgenstein says He exists, but He falls into the category of things that cannot be thought about or spoken. So the Tractatus remains, though this is not always fully understood, a blend of logic and mysticism; yes, mysticism.

The objections to the Tractatus go even deeper than that. How do we know that the relation between language and reality is a 'logical form'? Wittgenstein offers no solution to this problem. More than that, the category of things we are not, by his methodology, supposed to talk about, we simply must talk about, if social existence, civilization itself, is to be possible. For instance, we are not supposed to talk about good and evil, or even more basic concepts of right and wrong. Art also falls into the category of the inexpressible, which means that all forms of aesthetic language are simply nonsense.

In the end the Tractatus might be said to be both brilliant...and arrogant. The author himself eventually exploded the boundaries he had imposed on thought and action.
Posted by Anastasia F-B at 16:16