The BBC and the Gypsy; the Manipulation of News 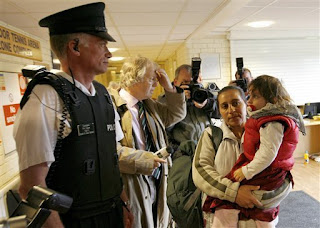 I assume most people in the UK saw the BBC news reports from Northern Ireland about the attacks on ‘Romanians’ in Belfast. I have to say the whole thing made no sense to me. Did the people of Northern Ireland have a particular prejudice against Romanians? Why Romanians and not, say, Poles, who have a higher visible presence throughout the United Kingdom? Why were Romanians concentrated in such numbers in such a confined location? I suspected there was something more to the whole story: it simply made no sense to me as it stood. Now, I have to tread carefully; for you see the people in question were not Romanians at all: they were Roma, gypsies, if you prefer.

Yes, I reached that conclusion myself because, well, they looked like gypsies rather than people of mainstream Romanian ethnicity. But it was James Delingpole, the Daily Telegraph blogger who revealed the full facts, repeated in The Spectator (27 June)

It maddens me to discover that news is being 'managed' in this fashion, that ‘Auntie’ is deliberate treating us as like children. It's not a question of racism; it is a question of being allowed to form our own judgments and make up our own minds. In place of this we get the usual tired and pious platitudes from politicians and the press, the same platitudes trotted out over the electoral advance of the BNP: how ‘disgusting’ it all is, how ‘abominable’ people are; and so on and so on, yawn, yawn. There is no attempt whatsoever to uncover motives; there is no attempt to explore all the nuances of the story in a way that would make it comprehensible.

We have to face these questions, and face them openly. It does no good at all to hide behind news management. Actually it’s more than news management, far more: it’s a deliberate attempt at the management of morals; Lord forbid that we should reach the wrong conclusion. The point is lots of people will reach the wrong conclusion if they are treated in this way. Prejudice is only defeated by reason and policy not by half-truths and lies. Facts, key facts, must not be withheld. For when they are it is easy to conclude that there genuinely is something to hide. If anything is more guaranteed to perpetuate suspicion and dislike it is truth by half-measure. By this process the Roma will never escape being thrown into the role of victims.

The BBC is now manipulating the news in various ways: the point is to make it understandable
Posted by Anastasia F-B at 19:05