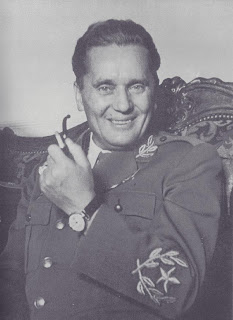 The late Marshal Tito presided over a dictatorship just as brutal as any of the other Communist regimes of the day. If fact, if you examine that period of Yugoslav history just after Tito's split with the rest of the Soviet Bloc, then it is really difficult to conclude that what was at work was anything other than Stalinism without Stalin.

In 1949 the Communist leadership began the forced collectivisation of agriculture. Those who resisted were branded as 'kulaks', in echo of the mass Soviet collectivisation from 1928 onwards. Just as in Russia, agricultural production levels fell as a consequence of the huge disruption entailed, and the general decline in peasant productivity. The most significant resistance came in Bosnia in May 1950, where some Serbs and Croats joined in an uprising initiated by the Muslim farmers. Several hundred peasants were killed before the rising was suppressed.

The split with the Soviets also entailed a huge increase in the state security apparatus, which put the membership of the Yugoslav Communist Party under scrutiny, as well as the general population. In all some 16,000 alleged Soviet sympathisers were arrested, many of whom ended up in the concentration camp on Goli otok and elsewhere. Tito's terror was later brilliantly depicted in Emir Kusturica's damming film of 1987, Otac na službenom putu (Father's Away on a Business Trip). The dreadful conditions suffered by the prisoners even shocked Milovan Djilas, then a government minister, in a visit he made to Goli otok in 1951.

As the state of siege became less intense after the death of Stalin conditions began to improve somewhat throughout both the economy and society in general, with a move away from collectivisation and a new stress on workers self-management, which, in the end, served to distinguish Titoism from the forms of state-centralism practiced among the Comecon countries. To some extent this was an inevitable consequence of the forms of western aid upon which Tito became more reliant after 1948. But as the puppet-master and dictator, Tito was no less vigilant, and no less brutal, than any other in the Communist Bloc.
Posted by Anastasia F-B at 18:18