Jews and the Black Death 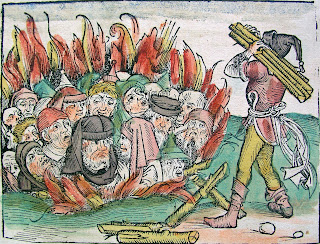 There is an excellent article entitled Black Death and the Burning of Jews by S. K. Cohn in Past & Present (no. 196). On the basis of an analysis of contemporary chronicles, Cohn argues that attacks on Jewish communities were rarely the spontaneous work of faceless and impoverished mobs. Rather many of the assailants came from the higher ranks of Medieval society, even including the aristocracy. Indeed, some attacks, the author continues, were started by the nobility in accordance with the law. In one particularly chilling letter of the day it is noted that the Jews of Villeneuve "have been burnt by due process." Jacob von Köningshofen, a chronicler based in Strasbourg, explains how "the Bishop and lords of the Imperial cities agreed to do away with the Jews." The notion of the 'lower class' mob, Cohn argues, is a modern invention.

Albert of Cologne, another chronicler, lays stress on the "horrible means by which the Jews wished to extinguish all Christendom, through their poisons of frogs and spiders, mixed into oil and cheese."
Posted by Anastasia F-B at 00:44