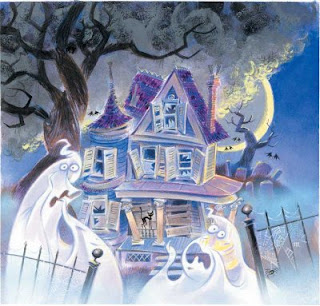 My parents have a huge collection of books. I would not be pretentious enough to say that they have a library as such, though one whole room in our house in London is lined from top to bottom with volumes on so many subjects, both fiction to non-fiction. I have my own books, both in my bedroom at home, and in my rooms at university. But a lot of my explorations and my discoveries were made in the hours I spent in that haven, amongst the treasures the two of them had gathered in the course of their lives.

I have one of Father’s books in front of me now, one he bought when he was sent away to school at the age of twelve. It’s simply called Ghost Stories, edited by John Hampden and published in paperback by Everyman in 1963, a reprint of an edition first published in 1939.

I’m looking at the contents page now, reminding myself of some of the great stories, which used to send me under the blankets when I was ten years old! There they are: Ligeia by Edgar Allan Poe; The Signalman by Charles Dickens; All Hallows by Walter de la Mare; The Watcher by J. Sheridan Le Fanu, The Beast with Five Fingers by W. F. Harvey and many more. But there are three in particular that really terrified me. I have read heaps of ghost and horror stories since but I would still include these I discovered over ten years ago now as the best ever. They are Count Magnus by M. R. James; Mrs Lunt by Sir Hugh Walpole and The Tomb of Sarah by F. G. Loring.

It’s difficult to know how to describe Count Magnus. Like much of M. R James’ work in this area it crosses the boundaries between genres; between horror and haunting. It’s a warning of a kind; over the limits of curiosity, of the dangers of getting to close to the evils of the past.

Mrs Lunt is about a ghost, oh yes, but one with a substantial and growing presence: that of a murdered wife determined on revenge and of a husband, wrapped ever more closely in terror, and unable to fight it off.

The Tomb of Sarah was my fist encounter with vampires, well before I had heard of Bram Stoker and Dracula. Sara still terrifies me far more than the caped count! Here I am now at the page with the inscription on her tomb:

For the sake of the dead and the welfare of the
Living, let this sepulchre remain untouched
And its occupant undisturbed until
The Coming of Christ.
In the name of the Father, the Son
And the Holy Ghost.