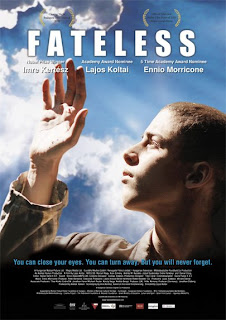 I think I was, oh, about fourteen when I first saw Schindler’s List, a movie that made such an impact on me that I followed it up by reading as much Holocaust literature as I could find, including the novel upon which the movie is based. To date I’ve read- aside from Keneally-Tadeusz Borowski’s This Way for the Gas, Ladies and Gentlemen, Primo Levis’ If This is a Man, Elie Wiesel’s Night, and Wielsaw Kielar’s Anus Mundi. The work that made the greatest impact on me, in simple emotional terms, was Andre Schwarz-Bart’s The Last of the Just, though the subject matter of this is more wide ranging than the Holocaust as such.

Now I have just finished Fateless, a novel by Imre Kertész, the Hungarian Nobel laureate.

It tells the story of fourteen-year-old Gyuri, a Hungarian Jew, who was arrested one day, in a sudden and Kafkaesque fashion, before being transported, first to Auschwitz, where he survives a selection, and then on to Buchenwald and Zeitz, a sub-camp of Buchenwald. Essentially it follows Kertész’s own experience, his own path. It follows by steps, small steps, the process of bewilderment, incomprehension, degradation and-oddly enough-acceptance. Gyuri’s destiny has been determined in part by fate and in part by freedom, if that makes any sense at all, freedom in the sense that things happen more by accident than design.

In the end Gyuri survives. He cannot forget the past and begin anew, as he is urged by the few fiends he has left in Budapest, because, as he puts it, he cannot give orders to his memory. People, those who have never experienced the camps, are keen to talk about the ‘hell’ and the ‘horror’. But Gyuri, what does Gyuri feel? Why, a certain nostalgia;

It was that particular hour, I recognised even now, even here-my favourite hour in the camp, and I was seized by a sharp, painful, futile longing for it: nostalgia and homesickness. Suddenly it sprang to life, it was all here and bubbling inside me, all its strange moods surprised me, its fragmentary memories set me trembling. Yes, in a certain sense, life there had been clearer and simpler.

I suppose that it is possible to argue that most literature dealing with the experience of the camps is too translucent, in that the horror is perceived not by degrees but all at once in prefect apprehension. Not so with Fateless. It proceeds by slow, almost pedantic degrees and-apart from the gradual dehumanisation suffered by Gyuri and his compatriots-the horror is never that horrible. Indeed, rather surprisingly, the Germans hardly figure at all in the narrative, in a system that seems almost to be run by the inmates themselves.

The book, and the movie upon which it is based, have been very well received. One only has to read the customer reviews on Amazon UK to get a small flavour. One even says that it ‘takes your breath away.’

What did I think? Did it take my breath away? Well, no, it did not. In the end I remained as detached and as unengaged as Gyuri himself. The prose is generally good, if a little opaque at points, though, of course, I can only comment on the English translation, not the original Hungarian. The piecemeal perspective is good, close to the fashion, I imagine, that most people, most individuals, would have experienced the whole process or, better said, the way of being processed. Kertész was there; he knows more about these things than I ever will. I can only comment of Fateless as a work of literature, and as a work of literature it left me cold.
Posted by Anastasia F-B at 07:51