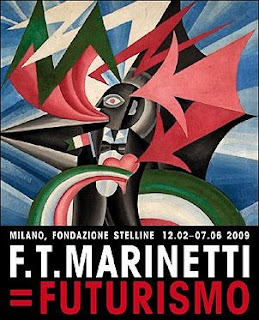 I first came across mention of Futurism a few years ago when I was researching the history of Italy, with specific reference to the rise of Fascism. Perhaps the most exciting thing for me was to discover a collection of Futurist Manifestos in my parents’ book collection, really marvelous stuff, full of energy and dynamism.

OH! pleasant exercise of hope and joy!
For mighty were the auxiliars which then stood
Upon our side, we who were strong in love!
Bliss was it in that dawn to be alive,
But to be young was very heaven!--Oh! times,
In which the meagre, stale, forbidding ways
Of custom, law, and statute, took at once
The attraction of a country in romance!


Yes, it was, despite what came later. I certainly make no apology for falling in love with the words of that great showman and clown, Filippo Marinetti, particularly his ‘declaration of war’ published in Le Figaro in February 1909, which announced the arrival of Futurism to the world. It still carries some shock value, a threat to all bourgeois sensibility. The art of the past, even the greatest, is denounced before the author goes on to call for the destruction of all galleries, archives and libraries. More than that, he calls for the purification of a dying, claustrophobic world through war. Yes, it’s shocking, is it not? It’s also exciting; it excites me in its celebration of youth, violence and speed.

I know, I know, it’s bombastic and adolescent, but it was written at a time when art, Italian art, was dying under the deadweight of the past, of inherited culture. The destruction of the past was really little more than a call for the flames of the phoenix; for a form of rebirth.

The exhibition itself is a delight, with work by Carlo Carra, Giacomo Balla and Gina Severini. For me the highlight was Umberto Boccioni’s wonderful Unique Forms of Continuity in Space, the great masterpiece of Futurist sculpture, a figure that, though frozen in bronze, is full of dynamism and movement. Yes, bliss was it in that dawn to be alive! 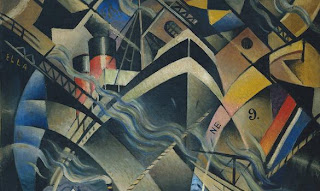