The Resistance, Alibi of a Nation 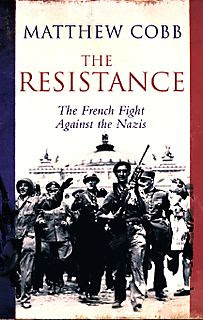 A second bite at French history, war-time history, in one session: there is simply no stopping me!

Anyway, I’ve been skimming through Matthew Cobb’s recently published The Resistance: the French Fight Against the Nazis. Interestingly enough, considering the importance of this topic, considering how much it has entered the popular imagination through visual media, there is very little published material in the English language.

I commend this book; commend it, for blowing away some cherished myths: that the Resistance made an important contribution to the Allied victory-it did not; that most French people were in favour of its actions-they were not. The Resisters, like the arch collaborators, were in a tiny minority. Most people simply wanted to be left alone, to get on with life; most people identified with Petain and Vichy until there was no more point in identifying with either. As Arthur Koestler put it as long ago as 1942;

When the scales of success turn in favour of England, the barricades will emerge from the pavements of the towns of France, the snipers will appear behind the attic windows and the people will fight in the old days. Not before.

Many of those in the Resistance were Communists, traitors before June 1941, and ‘patriots’ after. The fighting, such as they did, was often more against each other, in murderous fratricidal disputes, rather than against the Germans. Only Jean Moulin, a true patriot, gave the overall movement a degree of coherence, and then only temporarily. If there had to be resistance then the Germans could have wished for no better enemy. Right up to the Liberation the Gestapo had no difficulties in recruiting French spies to penetrate the various groups.

It’s often said that reprisals, the kind of savage reprisals the Nazis specialised in, had an effect contrary to that intended, drawing in ever greater degrees of opposition. Well, in the case of France, they did not: the harsher the reprisals, the more people began to hate and resent the resisters who had occasioned them. When Jacques Bingen, a French SOE agent, escaped from the Gestapo in Clermont-Ferrand, a woman stopped a passing German lorry and pointed out where he was in hiding. And this was in May 1944, while the nation was on the frontier of liberation.

Cobb writes well. More important, he writes with authority and objectivity. One cannot but admire the courage of a few selfless people, tremendous courage in the face of the most ruthless enemy. But, in the end, the Resistance did not raise France from the ashes. That honour belongs to Charles de Gaulle, the greatest patriot of all.
Posted by Anastasia F-B at 01:27