Existentialism and Fascism: the Case of Jean Paul Sartre 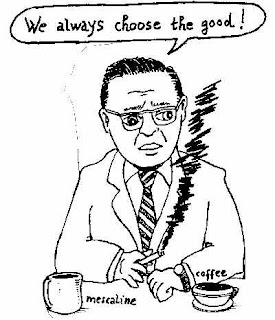 Sartre's understanding of politics was not just dangerous, it was dangerously incoherent! He simply could never make up his mind over which direction he wished to travel. I think he saw in politics a way of seeking confirmation of himself, a classic example of existential bad-faith! On Fascism itself we have the words that de Beauvoir gave to a resistance leader "...if Fascism were to triumph, that's just what would happen. There would be no more human beings..."

In other words there can be no human beings in the total absence of freedom, understanding humanity as a fluid rather than a static concept. But this statement is just as valid in relation to Communism, not as it existed as a theory, in the minds of the likes of de Beauvoir and Sartre, but as a living practice. On Fascism there is also the observation in Existentialism is a Humanism that if the doctrine prevailed "Fascism will then be the human realty, so much the worse for us." It didn't seem to stop the master publishing in occupied France, though!
Posted by Anastasia F-B at 08:09