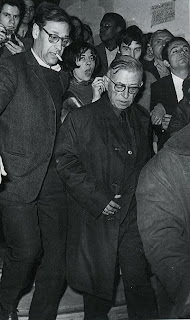 Jean Paul Sartre was in the middle of writing his treatise on Gustav Flaubert at the time, and generally more preoccupied with the events of 1848 than those of 1968! In the words of one of his best biographers "Fully absorbed by Restoration France, the riots of 1831, and the revolutions of 1848, Sartre was at once present and quiet absent from the events of 1968" (Sartre: a Life by Annie Cohen-Solal, 1985, p. 471)

There he was, coming in his most frightening form: the slightly worn-out fellow traveller and, worst of all, an old bourgeois humanist! "As for me, nearly two years after May 1968, he later explained, "I was still trying to work out what had happened. I could not quite work out what they wanted and what role old fogeys like me were expected to play." I can still hear the laughter of the Gods. :-))
Posted by Anastasia F-B at 22:49