Junk Politics-the World through the Eyes of Chomsky 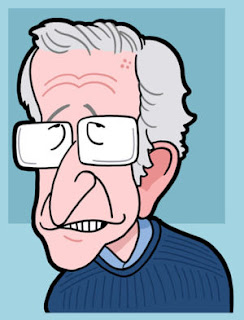 Is there anyone more deeply ignorant about political reality than Noam Chomsky?
Insofar as the benighted professor can be identified with anarchism, he shares the same intellectual confusion of others who fall into this category; people like Emma Goldman, who was seemingly unable to distinguish between democracy and fascism.

According to the view Chomsky puts forward in American Power and the New Mandarins the United States, his own homeland, is a state not that far removed from fascism, one in need of 'denazification.' Is that junk? Well, I leave you to judge for yourself. It might help you if I give a small example of this kind of confusion shown by others on the left. In 1930 when Heinrich Bruning was appointed to head a minority administration in Germany, supported by the emergency powers of President Hindenburg, Die Rote Fahne, the newspaper of the KPD, declared in banner headlines that 'Fascism is now here!'. Three years later they were to discover just how wrong they had been.

In denouncing one form of 'Fascism' he saw no contradiction in supporting another; or at least no contradiction in signing a petition on behalf of Robert Faurisson, the French Holocaust denier, on the grounds that he was defending the right to free speech. But it was so much more than that: the petition was a document that gave credence to Faurisson, a 'respected professor', 'who has been conducting extensive research into the "Holocaust" question'. There were those on the French left who could not quite believe that Chomsky had put his name to this, assuming that it must be some mistake, or that he had not read what he had signed. When told that the 'respected professor’, was a notorious anti-Semite, who believed, amongst other things, that it was the Jews who had declared war on Hitler, Chomsky insisted that, so far as he could determine, Faurisson was merely an 'apolitical liberal.'

In defending himself Chomsky then proceeded into the deepest forms of sophistry, saying that Holocaust denial was not in itself proof of anti-Semitism because "if a person ignorant of modern history were told of the Holocaust and refused to believe that humans are capable of such monstrous acts, we would not conclude that he is an anti-Semite. That suffices to establish the point at issue." What, one has to ask, about those like Faurisson who have studied modern history and still deny the Holocaust?

There are other areas where Chomsky's peculiar blindness, his obsession with American 'corporate Fascism', took him from one true extreme to another. Did you know, for instance, when the New York Review of Books praised François Ponchaud's Cambodia: Year Zero, Chomsky accused it of being guilty of "extreme anti-Khmer Rouge distortions." If there were atrocities in Cambodia, Chomsky continued, they were the result of the American bombing campaign.

This should really come as no surprise, as Chomsky's Manichean politics have continued to place all the good on one side and all the bad on the other; so the good naturally included people like Slobodan Milosevic, as well as Pol Pot. You see, when it comes to any form of action in the world, there is nothing, simply nothing, that the west can do right in the Chomsky scheme of things.

Chomsky is cast in exactly the same form as those left-leaning intellectuals in the 1930s who saw the Moscow Show Trails as a fine example of 'people's justice.'. With some people bad-faith, dissimulation and blindness are always present.
Posted by Anastasia F-B at 17:56