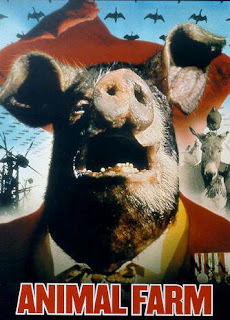 I have always felt it to be wrong that Orwell has been classified as an anti-Stalinist, when a reading of his work gives plenty of indications that he was opposed to Communism in general. Even Animal Farm is only in a partial sense a parable against Stalinism, though this is the form in which it is generally understood. But careful reading will show that the ideal is corrupted well before Napoleon takes absolute power.

On the wider point, let the author speak for himself;

It is probably a good thing for Lenin's reputation that he died so early. Trotsky, in exile, denounces the Russian dictatorship, but he is probably as much responsible for it as any man now living, and there is no certainty that as a dictator he would have been preferable to Stalin. (New English Weekly, January, 1939)

The fact that Trotskyists are everywhere a persecuted minority, and the accusation usually made against them, i.e. of collaborating with the Fascists, is absolutely false, creates the impression that Trotskyism is intellectually and morally superior to communism; but it is doubtful if there is much difference. (Notes on Nationalism, October 1945)

Now, as far as his membership of the Marxist POUM during the Spanish Civil War is concerned, this seems to have come about largely by accident;

I was associated with the Trotskyists in Spain. It was chance that I was serving in the POUM militia and not another, and I largely disagreed with the POUM 'line' and told the leaders so freely...(Partisan Review, Sept.-October, 1942)

Orwell's own politics are neatly summarised in two of his essays, The Lion and the Unicorn and The English People. He draws his inspiration from a long native radical tradition, a tradition deeply hostile to the abstractions of alien political theories;

The various other Marxist parties, all of them claiming to be the true and uncorrupted successors of Lenin, are in an even more hopeless position. The average Englishman is unable to grasp their doctrines and uninterested in their grievances. And in England the lack of a conspiratorial mentality which has developed in police-ridden European countries is a deep handicap. English people in large numbers will not accept any creed whose dominant notes are hated and illegality. The ruthless ideologies of the Continent-not merely Communism and Fascism, but Anarchism, Trotskyism, and even ultramontane Catholicism-are accepted in their pure form by only the intelligentsia, who constitute a sort of island bigotry amid the general vagueness. (The English People).
Posted by Anastasia F-B at 16:05