Death, Doom and the Dutchman 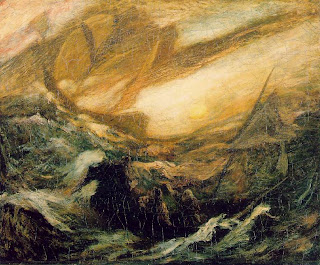 I love the stories and legends concerning ghost ships. Not surprisingly these are particularly strong in the west of England, specifically in the county of Cornwall, whose long coast has seen many ships wrecked over the years, sometimes by accident, sometimes by design. The theme is also popular in poetry, and I’m thinking specifically of "The Rime of the Ancient Mariner";

The helmsman steered, the ship moved on;
Yet never a breeze up blew;
The mariners all 'gan to work the ropes,
Where they were wont to do;
They raised their limbs like lifeless tools -
We were a ghastly crew.

But it’s the story of The Flying Dutchman that intrigues me most, a story that inspired Wagner to compose the one opera in his repertoire that does not drive me to complete distraction!

There are several versions of the legend. The version used by Wagner concerns a captain by the name of Hendrik Vanderdecken, condemned to sail the seas until doomsday for cursing God.

The story of the Dutchman first appeared in print in 1795 in George Barrington’s Voyage to Botany Bay;

I had often heard of the superstition of sailors respecting apparitions, but had never given much credit to the report; it seems that some years since a Dutch man of war was lost off the Cape of Good Hope, and every soul on board perished; her consort weathered the gale, and arrived soon after at the Cape. Having refitted, and returning to Europe, they were assailed by a violent tempest nearly in the same latitude. In the night watch some of the people saw, or imagined they saw, a vessel standing for them under a press of sail, as though she would run them down: one in particular affirmed it was the ship that had foundered in the former gale, and that it must certainly be her, or the apparition of her; but on its clearing up, the object, a dark thick cloud, disappeared. Nothing could do away the idea of this phenomenon on the minds of the sailors; and, on their relating the circumstances when they arrived in port, the story spread like wild-fire, and the supposed phantom was called the Flying Dutchman. From the Dutch the English seamen got the infatuation, and there are very few Indiamen, but what has some one on board, who pretends to have seen the apparition

There were numerous sightings in the decades that followed. In 1880 it was supposedly seen by the future King George V while sailing on the flagship Inconstant off the coast of Australia. However, the records of the voyage show that the sighting was not by George himself but by some of the seamen on board, who reported a strange red light as of a “phantom ship all aglow.”

Such sightings, according to the novelist Sir Walter Scott, among others, are a portent of death or disaster for the seamen involved. Yes, it may be so; for the sailor on the Inconstant who first saw the ghost ship died soon after in an accident. And so the legend sails on!
Posted by Anastasia F-B at 01:26