All Votes Are Equal, but Some Are More Equal Than Others 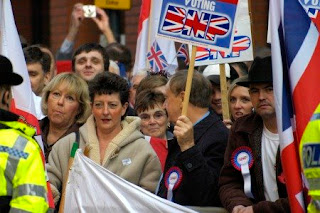 Anyway, I find it particularly amusing how certain political developments are received; for that reception usually tells me more about recipient than the object of their concern. Democracy is democracy, and all votes are important, all votes are meaningful in one way or another. But, oh no, they are not. Look at the pious statements, the expressions of shock and outrage, following in the wake of the BNP’s minor triumph in the European elections, allowing them to send two representatives to Europe. David Cameron, leader of the Conservative Party, a man whom I personally happen to admire, says that, “It sickens me and it should sicken everybody…it brings shame on us that these fascists, racist thugs should have been elected to the European Parliament.” Corporal Clegg of the Liberal Democrats says that the BNP, “…don’t provide any hope and any answers.” Paul Kenny, the General Secretary of the GMB union, said, “On D-Day, Britain sent an army to Europe to stop Nazis getting to Britain [Not exactly, Mr Kenny, but never mind!]….Britain is now sending Nazis to Europe.”

We have seen it all before, have we not, that democracy is a ‘good thing’ when it produces the results that we want. We, in the west, hold up democracy, with all of our cultural conceit and arrogance, as the panacea for the ills of the world, the ills, for example, of the Muslim world. For democracy, as Graham Greene’s Alden Pyle would have preached, is the ‘Third Force’, the new beginning, is it not? But give Muslims the vote then what do you get? Why, Hamas among the Palestinians, and Mahmoud Ahmadinejad among the Iranians. The latter just happens to have much popular legitimacy as Barack Obama and a hell of a lot more than Joker Brown.

So, now Nick Griffin and Andrew Brons are off to Strasbourg, and the other politicians walk off the stage to demonstrate their self-righteous disapproval. Not many are prepared to face the simple fact that the corruption of our whole complacent political system is to blame; and by corruption I mean so much more than the expenses scandal.

Our prized national democracy is little better than an elected dictatorship, where a government is chosen often not just on a minority of the popular vote but on the basis of contests in key ‘swing constituencies’, where a fraction of the vote determines the eventual outcome. There are whole areas of the country that can safely be ignored, because we all know the vote there is, so to say, predetermined.

The worst parts, the most neglected parts, are those huge fiefdoms of the Labour Party, particularly strong in the north of the country, ruled over by the modern version of the Robber Baron. I would go so far as to say that people in places like Humberside have effectively been ‘disenfranchised’, whether they vote or not, if that makes sense, in our Westminster elections. Oh, we would not have these Fascists in Europe if the elections were on the basis of good-old ‘first past the post’, say the jeremiads. No, we would not; but we would still have close on a million people with no effective voice.

The fact remains, as I said in my previous piece, that people are turning to the BNP precisely because their concerns over immigration, over their own position in society, over housing and over jobs, are simply being ignored. For God sake, forget the shock horror over the success of the BNP; look at its manifesto. What will you see? Why, it’s pure ‘Old Labour’, with a strong emphasis on nationalisation, high taxation, subsidy and protectionism. Yes, every vote for the BNP is an expression of disquiet over immigration policy. More than that, it’s the call of the marginalised and the dispossessed; it’s a call for the old left-wing certainties and shibboleths of the past. Now, there is a paradox upon which to take my leave! 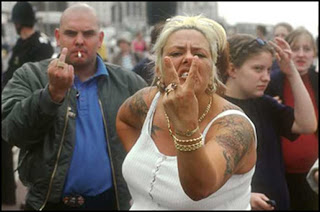