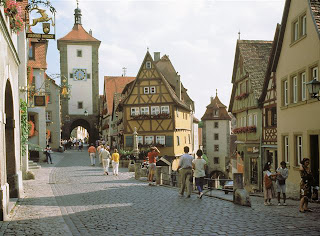 I don’t suppose too may of you have ever heard of seven-year-old Brigitta Hörner, who once lived in Rothenburg ob der Tauber in seventeenth century Germany. So here is her story

In the summer of 1639 Brigitta began to make claims that she was a witch; that she had attended sabbats, flying to these occasions on a fire-iron. She further claimed that while there she had promised herself to the Devil, who was present dressed in black. The devil, so said Brigitta, told her to curse rather than pray. The little girl further said that she had no choice but to become a witch, because she had been baptised in the name of Satan rather than God by the pastor of Spielbach, the village where she was born.

In much the same fashion that was appear later that century during the Salem witch trials Brigitta began to identify the members of her 'coven', adults from both Rothenburg and Spielbach. This added to the social tensions in the area, with people asking her to identify those whom they suspected of witchcraft. It was concerns over public order that caused the city council of Rothenburg to have Brigitta arrested on 8 July. She was now widely known in the area as the 'Little Witch Girl.'

It's an altogether tragic story. We simply do not know why she began to tell these tales, though Alison Rowlands in her work on the subject suggests that it was simply attention seeking born of neglect. Brigitta's mother and father were both dead, and her remaining relatives, including an uncle by the name of Hans Hörner, did not want to take responsibility for her, leaving her to wander around Rothenburg, managing as best she could. Her stories gave her some degree of power over an uncaring adult world.

The city councillors treated her kindly. After a brief interrogation they decided that her stories were not plausible. She was released into the care of the local hospital, a charitable institution used in the support orphans and the elderly. In the official report on the matter, Georg Walther, lawyer to the council, wrote that Brigitta's stories were a fantasy, most likely caused by the influence of the devil on her imagination, which is quite remarkably when one considers that was a time when the witch-craze across central Europe was at its height; a time when children were used without hesitation-as they were at Salem-to implicate an ever widening circle of people; a time when even the youngest children could be executed on a charge of witchcraft. Brigitta was simply told not to repeat her stories and take religious instruction from the hospital's pastor.

Sadly, poor little Brigitta only remained in the custody of the authorities for three months, whereupon she was released into the care of her uncle, Hans. An unwanted responsibility, she was passed between him and other relatives for some time after. Hörner started to beat her to force her out of the city. She was later discovered dead in a barn near Rothenburg in October 1640.

I post this in memory of Brigitta, with the sincere wish that her little soul has found peace.
Posted by Anastasia F-B at 07:15