Henry III and the Cult of the Confessor 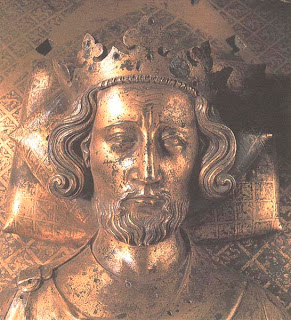 We cannot say for certain what it was that attracted Henry III to the cult of the Edward the Confessor, the penultimate Anglo-Saxon King of England, though his devotion was real enough.

In The Reign of Henry III David Carpenter suggests the key period in the development of Henry's interest in the Edward cult came in the mid 1230s, closely tied up with a number of religious and political considerations. It's possible that the senior monks of Westminster, who had much to gain from the amplification of the Confessor, persuaded the king to take an interest in the native English saint. Henry also adopted Edward at the time of his marriage to Eleanor of Provence in 1236, suggesting that the acquisition of a personal saint was a sign of growing up.

The monarchy, moreover, was beginning to lose its Norman origins, acquiring a more English identity in the process. And what better way of doing this than by linking its destiny with that of an English royal saint. Henry was to take this one step further by giving his sons Edward and Edmund Anglo-Saxon names.

I should add that while Edward was certainly a suitable subject for devotion he was not the best model of Medieval kingship, which required altogether more earthly qualities. Henry's lavish devotions were high among the factors that led to a new round of baronial wars, in the course of which a far worldlier Edward came to the rescue of the crown.
Posted by Anastasia F-B at 16:26