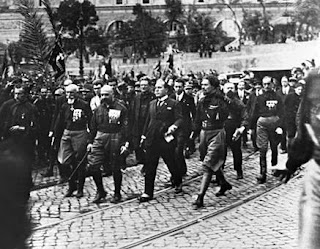 The chief advantage of the Fasci italiani di combattimento in 1919 was that it was tied to no philosophy and no ideology whatsoever; that it was, in other words, organised opportunism.

This, above all, was the Fascist style. It took the shape of a chameleon, able to change colours in accordance with the political climate. Unlike the socialists, the communists, the liberals and the conservatives the movement carried nothing, no system of beliefs or organisational structure, which would prevent its rapid mutations. Fascism, above all, was a mood, one of discontent, that could combine the arditi, who simple longed for action for the sake of action, and comic-opera revolutionaries like the Futurist Marinetti, who saw politics as an escape from cultural boredom.

This was transformismo politics, one that could, in theory have taken the movement to the left, if that is where the advantage lay. But in the end the advantage, the prospects for growth, advancement and power, were on the right, in the defense of Italy against Bolshevism. The appeal to the working-class, the direction of leftwards Fascism, had failed miserably in the elections of 1919. In the end Mussolini, in alliance with conservative rural Fascists like Roberto Farinacci, took advantage of the fear among the middle-class and the peasantry of a socialist revolution. It was Fascist anti-socialism that created a mass movement, and ensured thereafter that it would always be a philosophy of the right.
Posted by Anastasia F-B at 22:53