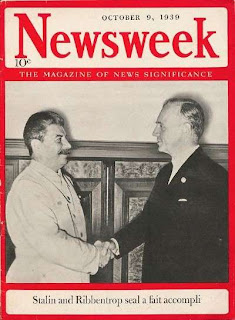 Well, was it? It seems appropriate to ask, with the D-Day anniversary just past.

Anyway, put out of your mind the suggestion that we were fighting to defend our homeland from the Nazis; we were not, not by any measure. We declared war on Germany; Germany did not declare on war on us! We declared war for what? For Poland, for the freedom of Poland? I'm now finding it difficult to stop myself from laughing!

Appeasement was not just a good policy: it was an essential policy. More than that, it would have been far better, in every respect, not to have gone to war in the first place. In July 1940, in what he called his ‘final appeal to reason’, Hitler called for an end to the conflict;

The continuation of this war will only end with the complete destruction of one of the two warring parties...I see no reason that should compel us to continue this war.

So, was the Second World War a 'good' war, understanding good to mean that it brought some benefit to those who needed help? The answer is not at all obvious, is it? Think of our leadership, think of the adventurism of Churchill, the tyrant of the glittering phrase. Soon after hearing of Hitler's 1940 peace offer Frances Partridge wrote in her diary "It's too tantalising since there's no shadow of a doubt we will reject any such suggestion. Now I suppose Churchill will again tell the world that we are going to die on the hills and the seas, and then we shall proceed to do so." A pretty accurate prediction, don't you think?

The problem with Churchill was that he was the eternal schoolboy caught up in the excitement of the battle, a man with little or no long-term vision; no understanding of the political consequences of fighting on the beaches and the landing grounds, in this place and in that; no understanding of the consequences for his country or its Empire of unrestrained and prolonged conflict. In 1945 he had heaps of moral authority. The trouble is he had almost nothing else; an Adam without the fig-leaf.

Oh, sorry, he did have something else: he was also the chief architect of imperial deconstruction, rather ironic when one considers his past history! Break through the circles of his rhetoric and the picture that emerges is not particularly uplifting.

What Churchill was really interested in was not an 'anti-Fascist' crusade; for it is doubtful that he ever really understood the nature of Fascism, a concept altogether too modern; he certainly never saw any fault in Mussolini, or danger in Japan. He wanted a scrap with Germany; that's it.

His scrap, moreover, was not, by and large, with German soldiers but with German civilians, waged with the ruthless weapons of blockade and bombardment, bombardment increasingly delivered without any degree of moral restraint. After all, if the Nazis were bad, why should we not be worse? As the civilian populations, swollen by refugees, of Poland, Belgium, Norway and the Netherlands faced starvation, Churchill refused to let food aid through the Navy's blockade of Europe. In justification he told Parliament in 1941 that the enemy would use fats to make bombs, potatoes to make fuel and that 'the plastic materials now so largely used in the construction of aircraft are made of milk.' Yes, he did! In October of that year Herbert Hoover asked;

Is the Allied cause any further advanced today because of the starvation of children? Are Hitler’s armies any less victorious than if those children had been saved? Are Britain's children better fed today because these millions of former allied children have been hungry or died? Can you point to one benefit that has been gained from this holocaust?

There is, of course, no answer. Nor is there any answer, when one thinks about it, to the effectiveness, or the desirability, of the bombardment. In 1941 it was estimated that only one in five British bombers was dropping their payload within seventy-five miles of their designated targets. Because of this targets were deliberately selected so that, even if the aircraft missed, there would be a 'bonus' in civilian deaths, and thus the weapons would not be wasted. But even this brought no discernable benefits, either in the dislocation of production or the collapse of morale. So what was needed? Why, more and bigger bombs; more and more dead civilians. Neither Churchill, nor Bomber Harris nor anyone else in the British command seems to have considered just exactly what impact the German Blitz on Britain had.

Some might argue that the war was fought to prevent the persecution of the Jews. It was not. Churchill showed almost no interest in the German persecution. More seriously, the twin weapons of blockade and bombardment impacted most severely on Jewish people; for as rations reduced everywhere they reduced even more severely in the ghettos; as the bombing took hold it was Jewish families who were among the first to be evicted to make way for those whose home had been destroyed. Indeed, the Final Solution itself was in every respect one of the direct consequences of the Second World War. It is inconceivable, in other words, it its absence.