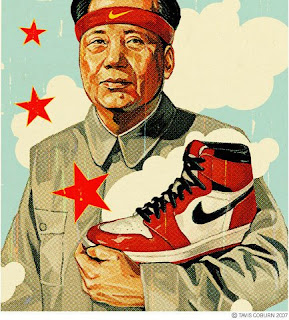 It was Mao's belief that there was a specifically Chinese road to socialism, though in pursuit of that road he effectively turned the classic doctrines of Marxist materialism inside out, with quite disastrous consequences for China and the Chinese people.

You see, in terms of economic development and industrial resources, China of the mid-twentieth century was about as far removed from that stage of advanced historical development that Karl Marx had believed to be the essential precursor of a successful revolution. Short of many natural resources it possessed one thing in abundance-people. And it was people who were to be the raw material in Mao's great experiment.

Now, though Lenin had always stressed that there was a subjective element to the whole revolutionary process, that it was an act of political consciousness, Mao took this subjectivity to what might be described as an anti-materialist extreme. Distrustful of experts and obstacles, distrustful of bureaucracy, he placed his greatest intellectual emphasis on achieving goals by an 'act of faith' alone; that even the most difficult things were not beyond the power of will. In other words, it was the will of the people, the power of the masses, that would enable the Chinese to catch up with the Soviets and the advanced industrial powers of the west.

This, in essence, is the key to the Great Leap Forward. By this Mao hoped that steel production would increase if the energy and will of the whole nation could simply be directed towards that particular end, regardless of technical and practical objections. Revolutionary zeal would be enough. Of course it was not. The steel that was produced was of poor quality and the neglect of other areas of the economy, agriculture in particular, was to create one of the worst man-made famines in the whole course of Chinese history. Despite this Mao did not abandon his belief in revolutionary spontaneity, which was to emerge once again, with equally disastrous consequences, in the Cultural Revolution.

In thinking of the deleterious effects of these forms of anti-materialist and, it might be said, anti-Marxist voluntarism, one should also consider the actions of Pol Pot, Mao's greatest and most murderous disciple. I have been to the Killing Fields; I have seen.

Mao still haunts modern China, a little like the ghost of Banquo, although less relevant, less frightful, even, with the passing of the years.
Posted by Anastasia F-B at 01:32