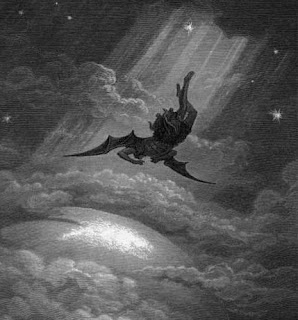 There are lots of fascinating snippets of information in Norman Davies’ monumental Europe: a History. The ‘capsule’ that caught my attention recently was that on Diabolos.

The Evil One has a pedigree going beyond the Christian tradition, traceable to the Epic of Gilgamesh, where he appears as Huwawa or Humbaba the Terrible. In the Manichean tradition he is the Prince of Darkness. For Aristotle the spirit of negation was defined simply as the absence of God, but for the Platonists he was Diabolos, the Old Enemy. From there he proceeds through the Bible into a fully evolved form, occupying the central place in Medieval demonology, and fascinating writers and poets from Dante to Goethe. As Stone quite rightly says, a history of Europe without the Devil would be as odd as an account of Christendom without Christ.
Posted by Anastasia F-B at 16:27