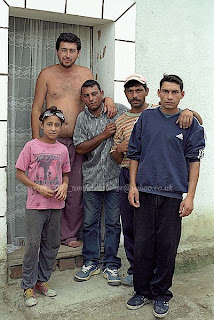 Here I am, mounting the scaffold, ready to put my head in the noose once again. Ah, but it is a far, far better thing I do than I have ever done…:-))

I found myself smiling when I read David Barrett’s report in today’s Sunday Telegraph on gypsy camps (Minister’s ‘bullying’ on gypsy camps). Why, you might ask, since these camps will cost the taxpayer £100 million pounds; yes, that’s right £100 million. It’s not really that funny that they are being forced by our wretched Labour government on people and communities that simply don’t want them, including the people of Earsham in Norfolk, who’ve had to put up with an illegal camp for some time, with all of the inconvenience this entails.

So, why is it funny? Well, just think of all that lovely money, just think of all of the contactors queuing up to get their hands on it, especially in times like these, so hard for the building industry in particular. But, you see, they don’t want the work! Indeed they are so reluctant that the Department for Communities and Local Government has issued guidelines saying that, where no bids are received, the gypsy project should be made part of a general building work, lumping in the good, the bad and the ugly. Kurt Calder of the National Federation of Builders says this is a clear attempt to force contractors into unpopular projects.

Seemingly one builder in northern England is refusing to bid on the unreasonable grounds that when he last worked on a gypsy camp he lost £30,000 in the theft of equipment and supplies. One simply has to laugh!

On an entirely unrelated point I’m a late convert to the Telegraph from the Times, our family paper by long tradition. I switched because of the tremendous job the paper has done in exposing the scandal of Parliamentary expenses, showing the true value of a free press in a democracy. And, no, I’m not an editorial plant!
Posted by Anastasia F-B at 19:12