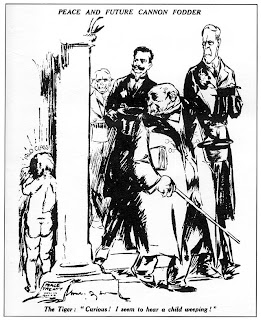 The problem with the Versailles settlement of 1919-and by this I mean the whole of the post-war settlement-is not so much that it was unfair, but that it created an unstable peace; a peace based on the satisfaction of some national aspirations and the frustration of others.

It also, it has to be said, created tensions within the various successor nations that were simply not compatible with democracy. In place of the nationality problems in the old Austro-Hungarian Empire came the nationality problems in Czechoslovakia, Poland, Yugoslavia and Romania, in some ways even more severe that what went before. Most serious of all, it was a peace predicated on the continuing weakness of Germany and Russia, and that could not last forever.

To this mixture of instability there was the added problem of Soviet Russia, where the democratic revolution of February 1917 was effectively destroyed by the Bolshevik counter-revolution in October. And I make no apology here for using the term counter-revolution in this particular context. After the forced dismissal of the Constituent Assembly in January 1918, the only fully democratic body in Russian history to that date, Lenin said that this "means a complete and frank liquidation of the idea of democracy by the idea of dictatorship. It will serve as a good lesson.” It certainly did, in Italy in 1922 and Germany in 1933.

Was there a solution to the nationality problem? Yes, I suppose there was, as the Population exchange between Greece and Turkey demonstrated. But can you imagine that happening across Europe, in nation after nation, across multiple frontiers? Can you imagine the upheaval and misery caused? Now go fast forward to 1945.
Posted by Anastasia F-B at 22:39