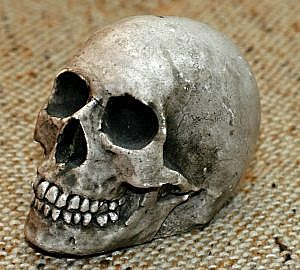 I have another tale from the shores of old England, that of the screaming skulls. The story goes, and there are some twenty of them kept in various locations across the land, that if they are moved from their locations they either emit a screaming noise or generate poltergeists. They are said to be the skulls of former residents, preserved where they lived and died, in some cases allegedly going as far back as the fifteenth century.

Probably the best known is that at Bettiscombe Manor in Dorset, supposedly that of a black male servant, who is said to have come to England from the West Indies some three hundred years ago as a retainer for the lords of the manor, a family by the name of Pinney. Just before he died he expressed the wish that his body be returned to his native home for burial, but his wish was ignored and he was interred in the local graveyard. Soon after the moans and screams started, coming from the grave. The body was thereupon disinterred, and for some bizarre and unexplained reason the head was removed, and the skull later preserved in the house.

From time to time attempts have supposedly been made by successive generations of Pinneys to rid themselves of the relic. One occasion it was thrown into a pond, only to be recovered and set back in place when the screams became too much.

Ah, but the Bettiscombe skull, you see, whatever supernatural properties it carries, is not quite what it was traditionally held to be. It is neither male nor of eighteenth century origin. On examination in 1963 it was concluded that it was female and some two thousand years old. The suggestion is that it might conceivably a skull from an ancient Celtic shrine, associated with the cult of the head. These are powerful objects attended by powerful and sometimes disturbing forces. Be afraid, be very afraid. :-))
Posted by Anastasia F-B at 00:53