Great Poster, Shame about the Man 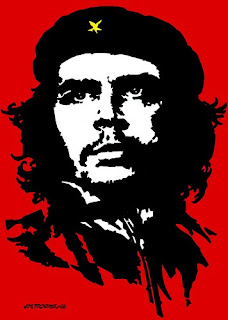 Last year I saw Che, the two part biopic about aspects of the career of Ernesto ‘Che’ Guevara, the Argentinean revolutionary and poster. Before that I saw The Motorcycle Diaries, which takes a view of his early life, his journey with a close friend from his home in Argentina to Peru, where he worked in a leper colony as a volunteer doctor. The latter was mildly entertaining; the former excruciatingly dull.

But it’s not these movies I really want to talk about; no, not the myth, rather the man, the nearest thing we have to a modern and secular saint. Indeed, I think he has acquired a semi-divine status among the local people in that part of Bolivia where he was executed in 1967. I cannot deny that Guevara was a good-looking man, one who made a great poster, eyes gazing into a million student bed-sits across the world. But look at the reality behind the image. What does one find? Why, just another repellent little thug who sought to pave the path to paradise with human skulls. Make no mistake, despite the worship he has been accorded, Guevara was a half-baked fanatic, a Marxist monster, who offered the usual substitution of tiresome abstractions for real people and real life. He was also a killer.

Soon after the overthrow of the Batista regime in 1959, Guevara organised the mass killings in Havana of former government supporters when he was commandant of La Cabaña fortress, with no attempt at any legal process. He wrote of this;

To send men to the firing squad, judicial proof is unnecessary. … These are the procedures of the bourgeois detail. This is a revolution! And a revolutionary must become a cold killing machine motivated by pure hate. We must create the teaching of the Wall

He was also responsible for the establishment of the Cuban Labour Camp system, where children as young as fourteen were incarcerated and where thousands died. A special section of these camps was specifically dedicated to dealing with Cuba’s ‘gay problem.’ Under the guidance of Guevara, the regime imprisoned a higher proportion of the population than Stalin and killed more in its first three years than Hitler did in the six years before the outbreak of the Second World War. His contempt for human life was evidenced in a remark he made to a Cuban newspaper after the 1962 Missile Crisis that;

If the rockets had remained, we would have used them all and directed them against the very heart of the United States, including New York.

This icon of western liberals and muddle-heads was also against freedom of religion, of the press, as well as the right to assemble or protest, or anything else that was not compatible with his corrupted view of a Stalinist utopia. He was also an utter incompetent. As Finance Minister and President of the National Bank, positions for which he had absolutely no qualifications beyond his mouth, he earned the singular honour of all but destroying the Cuban economy, with his emphasis on the ‘new man’, one who would accept ‘moral’ for material incentives. Like so much else in his mind the ‘new man’ was no more than a ghost.

So, failing as a minister he trotted off around the world on a series of mad revolutionary adventures, where he proved himself no more competent as a soldier, totally lacking in military capacity and political vision. Never mind; he still made a great poster. It’s just a pity that Pol Pot was not just a little more handsome. 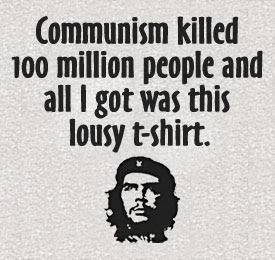 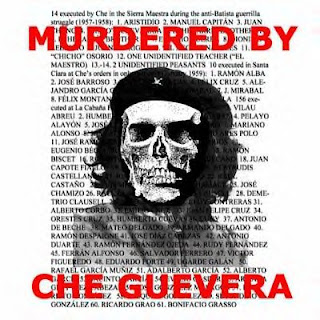