The Unbearable Lightness of Truth 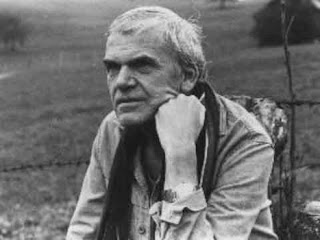 I really admire Milan Kundera as writer, I have ever since I read The Joke and The Unbearable Lightness of Being. I also admire the stand he made against communism in days gone by in his native Czechoslovakia. Though a member of the Communist Party in his student days he was quick to see it for the fraud it was. He was expelled in 1950 for 'anti-party' activities, which, as those who understand communism will know, could mean venturing the mildest criticism or telling a joke which implied criticism. Now, it seems, he was an informer.

In his eighties and living in France, he has denied the accusation that in 1950 he betrayed one Miroslav Dvoracek, a dissident, to the secret police. Dvoracek, who had been recruited by US intelligence, narrowly escaped a death sentence instead spending fourteen years in hard labour, mostly in uranium mines. The accusation against Kundera, which first emerged last year, has seemingly been confirmed by the discovery of new documents in the archives.

In his defence he said that such documents were often forged. Yes, that is true, but if forged they were also used. Kundera's file was simply left in the dust until uncovered by some Czech academics. While one cannot say with absolute certainty that these revelations are authentic on the balance of probability it seems likely. If so, I can understand the author's shame, the fear that this unpleasant truth might damage his reputation, has damaged his reputation.

Still, perhaps he would only gain by an honest and open confession. It would not lessen him as a writer, a man of letters, but it would provide further evidence-if evidence was needed- of the corruption, betrayal and moral decay that was an essential part of communism, a system where even the strongest found it difficult to resist. Who can honestly say, who beyond a saint or a fool, that she or he would not also have been compromised in similar circumstances?

That if gold rust, what then shall iron do?
For if the priest be bad, in whom we trust,
What wonder is it if a layman rust?

We should be thankful that we do not live in a world where even gold rusted.
Posted by Anastasia F-B at 15:14